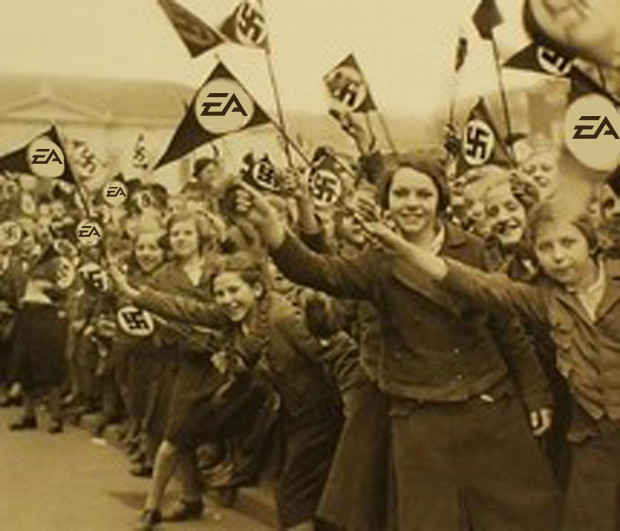 And what's another rage? Exclusive content. You notice the mention of the Steam exclusive versions above? That's not an issue, apparently. Steam exclusive DLC is also just fine. Mainly because it's on Steam, so it's forgivable. So let's say you're a console maker. It's perfectly okay for Sony to make Uncharted 3, Microsoft to buy Gears of War 3, and even Nintendo to make Zelda, but EA putting their own games on Origins as an exclusive is completely and totally out of line. Yeppers, that's what it is. But let's ask this question... with Minecraft being, arguably, the biggest thing to happen to PC gaming in years... where the fuck is it? Not on Steam. HOW DARE THEY?!?! WHO THE FUCK DOES HE THINK HE IS?!?! Oh wait... not a multimillionaire publisher so it's cool. Except he is. A multi million dollar publisher keeping his game exclusive to his distribution channel... where is the rage at this?

Of course Origin is not perfect by any stretch of the imagination and has a lot of controversial TOS. So does Steam if you ever bother to fucking reading it but still. So does Battle.net, iTunes, Xbox Live, PSN, Nintendo, Amazon, or pretty much anything you agree to. But if it really bothers you, here is a simple suggestion. Write to the company you disagree with, mention your concerns, and be respectable about it. Most companies, especially their community outreach partners, do keep track of this. Calmly express your concerns and you'd be surprised what happens. Don't steal games out of protest, you only prove the protections right. (aka, Ubisoft) Don't rant and rave, internet outrage is cheap and easy to ignore. And hopefully, in time, you'll give EA the chance to become the service that Steam is
today. You gave Steam that chance. Oh wait, when it first came out, no you didn't. Amazing how todays saviors of PC gaming was a bunch of Nazis a scant 7 years ago.
#ShareonCommunityBlogs
Login to vote this up!