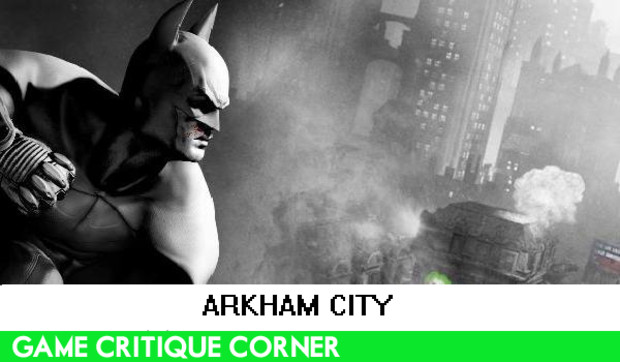 Arkham Asylum is the great comic-book video-game adaptation of all time. I don’t think anyone particularly doubts that, perhaps some have other allegiances, but to me Arkham Asylum is the pinnacle of the sub-genre of a sub-genre. It is perfection in motion and I’ve beaten the game three times, Platinum’d it on the PS3 and done all manner of tinkering over on the 360. The game has its faults, no doubt about that, the ending itself being one giant destruction of character and the word ‘interesting’ failing to even show up. I still love the game regardless.

Arkham City then has its work cut out for it. It’s the sequel to a game that really shouldn’t work, a licensed product that could’ve easily been churned out, except the developers did Batsy proud. This blend of Burton and Nolan and the comic book lore has all led to this wonder of an experience and I’d certainly like to see that continue. I find all the comic book writing to be quite cutesy and juxtaposes against all the seriousness currently going on, and I also find all the hyper-sexualization of the female characters to perhaps parody its inky medium brethren.

There is a worry on my mind that has probably rested for a long while and that is Arkham Asylum‘s strongest play point: the stealth. I felt like Batman 100% of the time and I don’t think there ever was really any disconnect at all. The stalking of guards and the playing of minds all centred the experience around a more cerebral approach to tackling the game’s problems and for that it has to be commended. Stealth has a genre has been filled with some really stellar titles like the Hitman series, Thief and (in some ways) the Sly Cooper series.

What separates City and Asylum is something scary to me. So far I’ve been treated to Riddler challenge room footage, City-flying footage and fighting footage. I’ve been hearing from the wonderful British developers (such as the ever sexilicious bodacious Sefton Hill) that the game will boast a giant increase in what you can achieve in combat. Explosive gel in mid-fight, double the animations, specific Catwoman stuff and all sorts of foolery. What I’m worried about is Arkham losing its magic, the real drive been its gameplay backbone: the balancing act.

Stealth in Asylum was a highlight for me simply because it was done so elegantly, but I didn’t dismiss the combat aspect. The Challenge Room mode made me a pro at the fighting system, so I’m more than ready to destroy everyone in City, what I am worried about however is throwing more weight around the combat mechanic and suiting it up. Lets be clear with this, we haven’t seen any Stealth gameplay at all. What I have seen is a little introduction to Two-Face’s Courthouse in which you creep about the rafters, take out one dude, and then jump down into a fight club.

Its not that an emphasis on combat has me worried, its that the balancing act of Stealth and Combat which made Asylum so strong will be lost. One will simply have more ‘screentime’ than the other, or at least leave a bigger impact on the progression. To be completely honest, this wouldn’t surprise me that much given Asylum‘s main boss fights were giant outpouring of muscle. Killer Croc is kind of an exception but it’s sort of this mishmash between the two, which ends up being pretty tense, but the rest of the boss fights are all ‘punch thing’. Perhaps in the first game there was already a weight around the combat.

Yet, the Stealth was so good and so well designed that you just couldn’t ignore the balancing of the two. It felt real and punchy and was just a highlight as any boss fight. The feeling you get from picking off guards one by one and seeing their little scared animations start to unfold, that is the beauty of Batman. It is of commanding fear as a weapon and I think Arkham Asylum certainly does this. City, once again as far as I’ve seen, doesn’t perfectly preserve this balancing act. I’m sure the game will be damn good, but perhaps a less enclosed space may drive Rocksteady to experiment elsewhere.

I’m fine with them experimenting, but I’d like some of that to rub off into the stealth aspect. It’d be really cool to have more ways to scare people, perhaps a crowd of bats to distract them while you escape or being able to hold guards by their throats and then drop them on to one of their friends. More ways to strike fear would freshen up the game, give it new life and perhaps the balancing act will be preserved. If it’s the same gameplay template from the first game I won’t exactly be disappointed but I won’t be thrilled, it was already quite a perfect system, but sequels are meant to progress or transcend ideas into new territory.

I’m looking forward to the game about as much as anyone, but I thought I’d raise this little qualm of mine.
#ShareonCommunityBlogs
Login to vote this up!