1st birthday- Or, how I learned to stop worrying and love the Destructoid blog.

The year was 2010. The game was Super Mario Galaxy 2. I was obsessed with that game. Pre-launch, I was scouring the net daily, looking for every piece of news, every preview, every opinion article, and even more. One day, I came upon an article on a site called Destructoid. I had read another piece or two of information on the site, and so I decided to take a little look around. My first impression of Destructoid was that it was a bit odd; it was different from other sites. What was with that robot mascot, anyway? While searching the front page for other interesting tidbits, I came across an article about Robopon, a shameless copy of Pokemon. I read it. I was hooked. I read every other Off-Brand Games article. I realized that Destructoid was a pretty awesome site, so I stuck around. It was in the pre-E3 madness that I finally realized that Destructoid would be my home.

The man- Chad Concelmo. The article- THIS. Zoo animals predicting E3. I was floored. It was glorious. This Chad man was just so AMAZING, and the animals were adorable. I soon created a user profile, using the name that I always used on the internet. I was a foolish boy, commenting like an idiot, thinking I was telling off whiners and trolls. This went on for a while, until one fateful night.

It was dark. It was in a park. I was on break from a community production of The Wizard of Oz, and there was wireless. Utilizing said wireless, I wrote a pretty bad intro post on my Zune and posted it. I didn't know how, but I got friendly reactions from the community, including Occams, who scared me a little bit back then.

I then decided to cut to the chase and fly over the rest of my early blogging. I had a one-part "series," another series that most people only came to for trivia (and I don't blame them), and a monthly musing or two. I was making plenty of friends, but my big break came in the middle of December.

Inspired by Elsa, I wrote an interview with Link, and was astonished by the reaction after it went live. After that, it seems like my blogging has been doing very well. I have the perpetually delayed Rex, PI series, and one of my favorites to write, RandomWolf. That's not the end of it, though. I've also done a few monthly musings, a silly blog responding to a prompt provided by mrandydixon after he won the trivia contest, and one more, my favorite of all: my interview with Matt Taranto, creator of Brawlinthefamily, my favorite webcomic.

In addition to the blogs, I have to give a shoutout to the Outer Heaven crew and the Chill Bros. Both places, I went in, not knowing what I'd expect, but I was welcomed with open arms, and I mean open. I often waste away hours at a time in chat, and that's one of the reasons that I've been slacking on the blog. Also, I need to find time to visit Mash Tactics again. I haven't been on Justin.tv in ages. I also joined the forums, but I can never stay in a forum environment for long before I stop visiting. Anyway, I'm getting off topic. Now for the part where I talk about why I love you guys.

You've introduced me to so many new things. You've recommended excellent TV shows, movies, and games. You people (Especially Law) got me hooked on anime and manga. I've listened to many an amazing album (and I've also listened to Kid A), and most importantly, I've made friends, who are what really make the Dtoid experience. The one thing that really drew me in after I began to blog was how nice you guys are. I still say that to this day. If you aren't a terrible writer, you will find a home here. Every person is an interesting fella with a story to tell, and almost every person is, in their own way, quite awesome.

I have to give a shoutout to a few people here, who were and continue to be important parts of Destructoid for me.

Lawofthermaldynamics, Occams Electric Toothbrush, mrandydixon, HandsomeBeast, Fame Designer, Talia, SteezyXL, vApathyv, T3HM0RR0W, the entire Outer Heaven crew, gennhaver and Max, everybody who follows me on Twitter, and nearly everybody who's commented on my blogs: I love you guys. You're an amazing group of people, and I'm very much the better for having met you.

I hope to continue to contribute to this marvelous community in the future and forever. Have this picture, I made it in Microsoft Paint on a laptop. 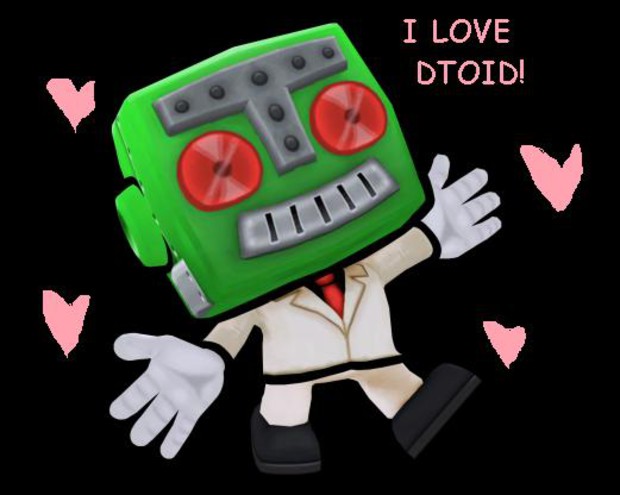