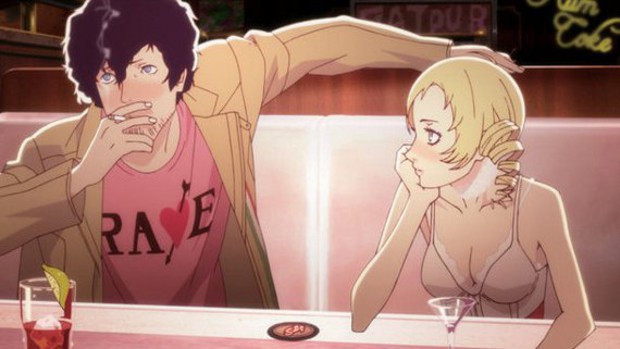 So... Tonight, after dinner, I set out on my bike to pick up my pre-ordered Love Is Over edition of Catherine for my Xbox 360. That route took me across a four-kilometer stretch of Danforth Avenue in Toronto. Now, for those of you unfamiliar with this Toronto landmark, Danforth Avenue anywhere near rush hour is basically New York City traffic meets the worst stereotypes about immigrant driving you can imagine.

You don't just ride Danforth. You live through it. I know bike couriers who work Toronto's downtown who don't dare ride Danforth during rush hour.

So I get to EB Games at Shopper's World. I hand in my pre-order slip, and the guy hands it back to me with a shake of his head.

"Sorry dude," the lanky guy with a goatee and long hair replies. "There's been a delay."

"You're an Atlus fan, you should expect this! There was a one-day delay at the production company and Catherine just got to our main warehouse today. You can probably pick it up tomorrow."

Defeated, I nod. I braved Danforth to come home, and tomorrow I will ride it again.

So anyone who's about to go pick up their copy of Catherine... Call first, at least.
Login to vote this up!