4:28 PM on 07.23.2011 (server time)    0
As some of you regular blog readers may have noticed, I briefly disappeared off the face of the Earth. Starting a business keeps you busy, but things have cooled off, so I'm happy to return to video game writing. I've got a lot of backlogged content to publish and more time to do it now. I thought I would start off with something I'd gotten interested in a while ago.

It's an interesting effect to play games from 10 or 20 years ago that you missed altogether. What some person views through a nostalgia filter you just see as a poorly aged, barely functional game. As it happens, I missed a lot of the classic PlayStation JRPGs, which are now arriving on the PlayStation Store. So this is the beginning of what I hope will be a series called Rose Colored Glasses, where I take a look at an old game without any of the nostalgia that players may have, even on a subconscious level.

Xenogears is one of the most venerated classics of the PlayStation era. The game is hailed for being groundbreaking in terms of storytelling, but more than 13 years later it�s made the march to PlayStation Network. Has it aged into a timeless classic like Castlevania: Symphony of the Night or will it be one of the many casualties of the dark ages of early 3D graphics like Resident Evil? Let�s dive right in. 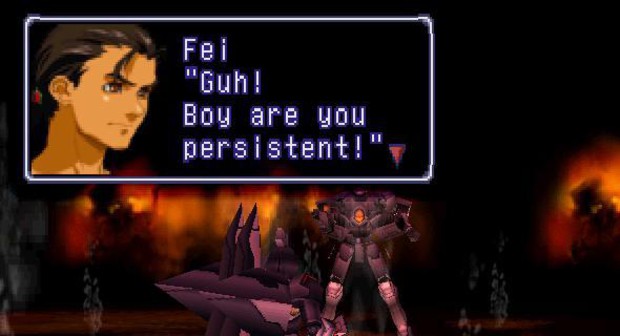 We often associate big, spiraling budgets with the AAA games of today but Xenogears suffers the problem of a weak finisher because of monetary troubles despite being made more than a decade ago. After two very strong acts the game quickly starts to lose steam around the third disc, when it�s easy to see the development team cutting corners. There�s a bizarre shift to 2D near the end, although this comes across less as more artistic philosophy and more an attempt to make sure the game didn�t wind up breaking the bank. The actual story ending wraps things up nicely but there�s a sense of rushed urgency about the finale that�s difficult to ignore.

Xenogears has its share of issues related to its aging and it comes from an era where more was more when it comes to writing, dialogue, and narrative. That being said I still see why it�s revered as one of the classic RPGs of its time. The rich narrative was interesting enough to keep me playing and the combat is reasonably enjoyable despite my established hate for random encounters. If you�re a nostalgia buff going through classics you missed, Xenogears definitely stands as one of the better games on the PSX pile in hindsight.
#ShareonCommunityBlogs
Login to vote this up!