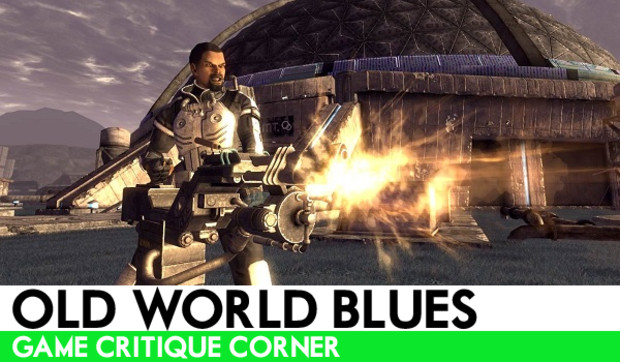 I reviewed the New Vegas DLC Old World Blues for Screenjabber earlier today and, quite frankly, it is perfect. I haven’t encountered such high regard for pushing quality past the original barebones game since Minerva’s Den with BioShock 2. This is an incredible experience and even if you hate New Vegas or haven’t picked up any of the other DLCs then this is the one thing that will sweeten the deal. There’s not much I can say without sounding like a review, but perhaps it would be best if I zoomed in on one particular aspect of Old World Blues that I found very interesting.

So, the game is told in typical New Vegas fashion through dialogue interaction, questing and all that good stuff but it’s told through a way I haven’t encountered for a while. It reminds me heavily of BioShock and some stages of Dead Space 2 in the poignancy that’s put across through the environment. Environmental storytelling has always been a great use of delivering narrative through a video-game, but it’s slightly weird in how rarely it’s actually effective. The problem I think developers have, right now, is putting too much emphasis on the ‘cinematic’ or ‘visual’ aspect of the environment and not the whole video-game thing.

Old World Blues features a cast of Think Tanks, brains in jars that float about attached to three monitors and a voicebox. They are all hundreds of years old and insane, they don’t even remember being human. On entry to the world they call you a ‘Lobotomite’, they’ve taken your brain… then mis-placed it in the hands of the main antagonist, and engage in (quite hilarious) banter over whether or not you have penises for toes. The writing in Old World Blues coupled with the insane quality of voice acting makes for a real treat and I find myself wondering if the last DLC can truly triumph this.

Each of the Think Tank members has become dysfunctional in different ways with one of them becoming obsessed with the human body, one has lost their voicebox, another talks in a trashy 50s sci-fi trailer announcer guy like this: putting EMPHASIS on CERTAIN WORDS such as TERROR and the HORROR! There are three Think Tank members who have particular dysfunctional traits that are exploited heavily. Dr Klein is the leader of the group and has anger issues, Dr Dala is the body obsessed one and Dr Mobius (the main antagonist) has a drug problem.

These are just spouts of dialogue which give depth and texture to the character, which lead to why they are so different in their language. What is perhaps more interesting however is when the environmental storytelling comes knocking, when the player just so happens to visit the place that the Scientists spent when they were human called Higgs Village. Suddenly, little items like Mentats and teddy bears take on whole new meanings and it is haunting and heartbreaking to explore their homes. The juxtaposition between how hilarious the writing is and how emotional this exploration is makes Old World Blues a highlight of my New Vegas career.

Dr Klein’s home is filled with empty bottles and alcohol everywhere. Every room is stuffed with it, and as you explore his home, you only uncover more little bites of story. His clothes are about the place, his items are about everywhere and the house is packed with party gear. It seems a world away from Klein’s anger and perhaps his work took over his life and lead him away from his friends, developing his anger management issues. Dr Dala’s house is full of teddy bears, constantly referenced in her dialogue, and this reveals her obsession with the human body. The innocence of the teddy bears and way she could play with them is quite… creepy.

Mobius’ house is probably the most revelatory. Exploring his home, room by room, more and more Mentats come about. It’s like we’re fast-forwarding through his life history until we reach the bedroom which has Mentats everywhere. Each of the characters I’ve mentioned don’t have dialogue options about your discoveries, the silent treatment then, and perhaps this is for the best. I don’t think the Courier nor I want to actually even prod and poke their brains about their problems. They’re too old for that, but perhaps one of the Think Tanks isn’t.

Borous, who talks in the TRAILER like choice of LANGUAGE as I mentioned EARLIER! His history is more about his pet dog, Gabe, and as you explore his homestead you find that his life was pretty tormented. There’s a note of the word ‘DAD’ with a knife through it, meaning that he couldn’t stand to even see a photo, there’s a key to his basement too and in there is dissected animals and teddy bears with knifes and scrawled things all over them. Outside the house is ‘Gabe’s bowl’ which is an instrumental item to a quest, which opens up Borous to talking about his issues.

Borous opens up where the others don’t and talks of a high-school crush and bullies all the way through high school, constantly staying he’s “top of the class” but was always sad about something. He talks about how he used to rest Gabe’s head on his knee and how the dog would listen to him. It’s heartbreaking, actually, and little details like the stabbed ‘DAD’ note and the basement open up that he just couldn’t find an outlet and tried to turn to Science instead. Borous tasks you with eventually killing a robotic Gabe, quite excited with it, but finally makes amends with his inner-self when you hand over Gabe’s bowl.

The silent treatment versus dialogue reward is quite tricky to talk about given one recognizes the player’s exploration whereas one leaves it to himself. This is all in the name of environmental storytelling and, quite frankly, I love both. I think if they were all silent then it would be a one-way designer/player thing but with one of them being actually open about their issues (they all are to an extent) then it gives some flavour and history to them all. I think blatant “Here is my life history, listen to it” that is typically found in RPGs kind of grows too tiresome and environmental storytelling can fix some of those issues.

I kind of left out the ‘critique’ part there.

I don’t think I need to explain why.
#ShareonCommunityBlogs
Login to vote this up!