7:50 PM on 07.09.2011 (server time)    0
You ever notice there’s something off about today’s AAA titles? There’s a certain monotony, a certain repetition, a certain potential gnawing at your brain as the answer “why” remains forever just out of reach. The most recent E3 didn’t help matters. We're all looking for "freedom" and yet there is so little to be found. These ponderances have troubled my waking game-related thoughts for some time now, and to resolve them I’ve gone back and had a look at the classic titles of yesteryear.


What did I pick? Isn’t it obvious? Star Control 2 is one of the masterpieces of our beloved medium. 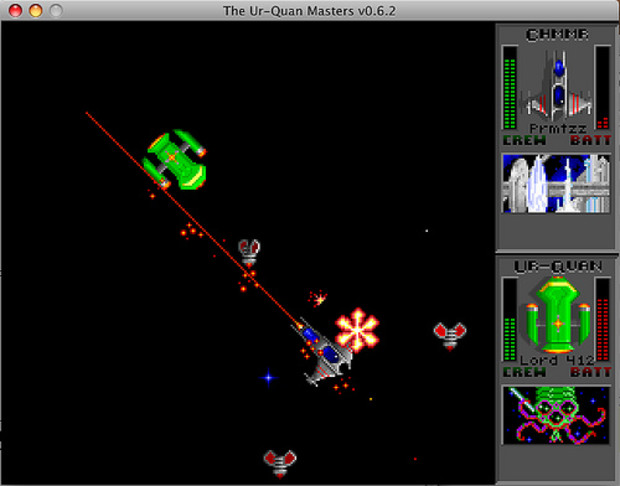 A Chmmr warship and an Ur'Quan dreadnaught fight to the death


I am by no means of the sort to bash modern gaming out of some faux loyalty to the 90s. I own all three consoles of this generation and enjoy all the fruits of HD gaming that anyone else does. But we have lost something haven't we?


Games have progressed technologically to unbelievable levels but I think it's obvious we're not "there" yet. Graphics may only get marginally better from here on out but we just don't have the memory or manpower to have amazing HD graphics, voice acting, physics engines authored by MIT's finest, AND an abundance of content like in the games of yore.


All that high technology, for the time being, limits us and essentially forces our games to be on rails. Of late, particularly in the aftermath of this year’s E3, I have felt a certain sameness pervading today’s titles—and no it’s not because they’re mostly all first person shooters (though that doesn’t help). We bash Final Fantasy XIII’s linearity but could the PS3 have even been capable of rendering a non-linear world of size, scale, and depth surpassing its predecessors? Or did the incredible White Engine just take up so much memory that they physically couldn't do that?

Even modern WRPGs like Fallout put you on rails, although admittedly they hide it better. There's always an A to B progression regardless of what we play. This I imagine will be the state of gaming until perhaps the next generation rolls out in a few years.


There's nothing inherently wrong with this limitation, in the future I suspect it will be seen as just another characteristic of our generation, the way we look back on immature character modeling or blocky graphics as characteristics of the previous two generations respectively. but I would encourage anyone with an urge to experience true gaming freedom to go back and try a game like Star Control 2, where perhaps primitive graphics by modern standards (I for one think they rock as hard as they ever did) give way to masterful artistic design, and deliver an experience of player immersion unmatched by anything else I've played in recent years.
#OpinionEditorial
Login to vote this up!

Playing video games doesn't make me a better person but it sure as hell makes me awesome.