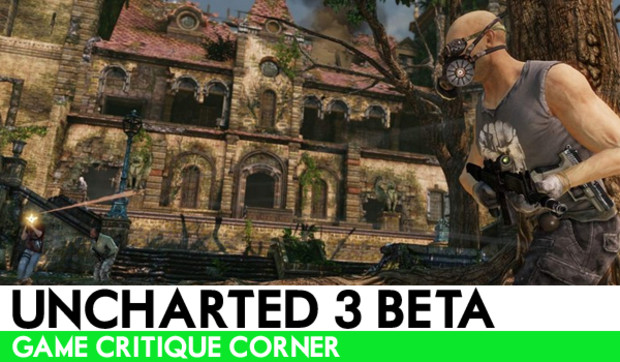 Man I love this.

Like it's almost hypocritical for me to say Uncharted 2 was my game of the year back in 2009, considering how much I whine on about "cinematic gameplay" and "player/player character disconnection". It's very hypocritical considering the protagonist of the game gives out wisecracks whenever he breaks an enemy's neck and I sometimes feel weirdly like 'I don't want to play you'. Then I get a giant train sequence shoved in my face where I'm free to move around and suddenly that whole 'filmic' attitude feels about right. It's also the only game I can recall in which the player character's pre-determined relationships still matter to me for some odd reason.

Uncharted 3's multiplayer Beta is just great, great fun until it decided to introduce Three Team Deathmatch in which three teams of two players battle for the top spot. It's Gear 2's Wingman mode but it's a lot tighter and intense for some reason. I think it might be the fact you can actually jump and run about punching people in the face or throwing them off ledges. Nevertheless, today I'd like to talk about something that you might find unsurprising. I am not a competitive person, I am more of a co-operative guy, and somehow TTD is one of the best modes of multi-player I've ever played.

Consider this, I play exclusively Medic in Team Fortress 2 yet here I am blasting away dudes and having the same amount of fun as it would be to finally turn a guy into a giant shiny invulnerable killing machine. I get my kicks from giving, not from taking, makes me wonder why I'm still forever alone. The fact is that Uncharted 3's multiplayer does not have a revive option, unless you're in the co-operative mode, instead you have to fight to save your partner and this adds a whole new fuel to the fire of diverse multi-player and I've only played a few hours.

See in normal team deathmatch it can be quite hectic and hard to buddy up with anyone given you all spawn all over the place. You can get a buddy partner for a little while but you can't always spawn right behind him. TTD demands you stick together, fight together and high-five together. It encourages team work, or rather, demands it in order for you to thrive. This is a tough, tough mode full of some of the highest level players and it all winds down to the simple conclusion that if you want to play then you've got to play together. I really, really recommend this for only playing with your friends.

Welcome to the criticism part, hello! Playing with your own friends over and over is a great way to express your friendship, although I happen to have zero friends and be an outright social recluse so that's a little discouraging. It's kind of weird when you end up trying to stick with some anonymous guy and I'm one of those no-mic guys too so it's worse when it becomes a one-way relationship. If I'm playing with a friend we constantly chat over Skype or Steam or MSN or whatever and keep our flow going. As said, you have to work together to survive, and you can't exactly do that with someone you don't know.

It actually reminds me of my pre-determined relationship argument in that it's hard to care about someone that the game either gives you a few minutes with or just outright states that this person is your main motivation - your 'girlfriend', 'wife', 'family' etc. - and that's the vibe I get from this TTD. When I play Medic on Team Fortress 2 I immediately care about everyone on the team because I know that, without me, they will all die and I will get zero points. When I play TTD in Uncharted 3 I only care about my buddy when he's someone I know and there's a very odd gap and I have no idea why that is.

Perhaps it's the fact that when the game forces you together in can be kind of hard to find the effort to jump from out of nowhere and save his back or pull off a funny move that you can both LMAO off over on Skype or whatever. The level of interaction depends on a relationship that already exists rather that be one in infancy or one in friendship. It's a very, very odd thing to be talking about and multi-player and me have never mixed. I've always been more of a class-based type in the Team Fortress 2 sense rather than the Call of Duty sense which is what Uncharted 3 is full of.

Don't get me wrong, I love the game for its beautiful emergent gameplay. The random treasure drops, the race to gather treasure and medals along with all those genius map designs such as the intro of Airstrip. It all makes perfect sense and I can't see myself not enjoying myself. There's nothing really to complain about here but I just thought it was noteworthy to discuss the nature of relationships inside a game mode that requires you both trust and care about the other person. It can't be forcefuly friends-only because some people have no-one to play with (hello) and playing strictly with strangers is rather random.

Perhaps multi-player isn't necessarily about the interaction with the game space as much as it is with interacting with friends. Spilling over small funny moments, that would usually be just random little chuckles, into laughter riots. Is that the beauty of community? I don't know. I was with a Team Fortress 2 community for a long while and we all had a laugh together. Whenever I went into a random game however it kinda lost that magic. Maybe multi-player doesn't mean multi-player but rather familiar-players who you can identify yourself with. Maybe I'm just ranting.
#ShareonCommunityBlogs
Login to vote this up!