Demon's Souls for n00bs: Risk and the Currency of Souls 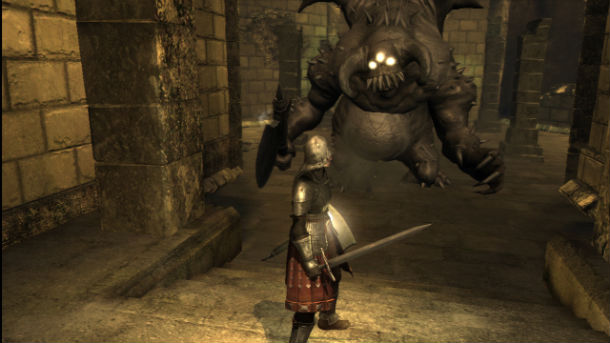 The current area the user is fighting in is very important; both the risk and the reward are fundamentally dependent on this. Assuming a fixed World Tendency, each enemy (and consequently, each area) has a minimum number of souls in it. Of course, as the user levels up, they will move from area to area, so this is dependent on soul level, but not strictly proportional to it. That's the reward part.

The risk is also measured in terms of not only the number and types/difficulty of enemies in the area, but also their configuration. Are there snipers on ledges? Are the enemies on precarious cliffs? Are they densely packed? Do they double team you? Are there narrow corridors to fight in? Summing up these components for each encounter in the area could result in a single overall risk value.

Finally, I'll ignore bosses, since they don't respawn with an area. They are a fixed boost to souls, and not suitable for a continual state of farming souls.


Maths and Codes, well, not really

I was going to write a kind of simulation to calculate the actual formula using those factors. It would basically start with a level 1 character and keep putting him through the first area and increasing stat points until it became more efficient to go to the next area, and so on. By "more efficient" I mean that he would get as many souls in a single run of the next area as, say, three runs in the current area, and that the next area isn't too hard (per the area's risk measure). There would be a lot of tweaking and tuning involved to get something that looks reasonable.

Unfortunately, that kind of simulation requires pretty decent data on how many enemies, what kinds, and what configuration are in each area. I don't even have the first two, let alone the fairly subjective last one. Maybe after I've beaten the game...

So my idea of quantifying risk is ultimately not realized, but I think the concept of it as it relates to this game is still an interesting one. With the right data, I think a formula is achievable. Of course, it's fairly useless, but aren't so many things we do in gaming?
#ShareonCommunityBlogs
Login to vote this up!