9:26 AM on 07.01.2011 (server time)    0
Contest is cancelled, sorry. Here is the deal, I am currently working up a prototype of a card game I dubbed "Violent Young Imps." To give a little flavor text, here is the plotline as it will appear in the instruction manual...

In the deepest of holes, so far from the wimps
Lay a ravenous clan of fastidious Imps
For they fight and they scrap for whatever they gets
Until some evil soul armed them all with mallets
For a task that needs doing, and no one knows why
Perhaps over population, but yeah... puppies must die
Someone bundles them up, in their nice wooden crates
And they drop down the chutes to their ultimate fates
Thus this cycle continues, perhaps to their shame
Til these violent young imps have turned it to a game
And the beast that delivers decides to comply
For if fairness what counts, even Imps have to die.
So they rush, fight, jump, claw to their ultimate doom.
Since some crates now have bombs that, when smashed. will go boom.
So the teams have been chosen for a game meant to please
and the winners the team that smashed mostly puppies.

How the game works is simple. Each player starts with a team of Imps labeled 1-8. Each round, players send an imp to fight over the crate. If the Imp is placed face up, their special ability takes place. face down, their value is a secret. First matching value imps go home, then special abilities trigger, the crate is scored (some crates have bombs and will kill your Imp), and the Imps go home. I have 7 Imps designed easily, before I went to work on the 8th, I decided "what the hell, I could promote my blog with this and give Dtoid community members something more to do than comment and dice rolls to win something." So I need you, my children, to design the Eighth Imp. Here is the current lineup and their explainations in gameplay terms. 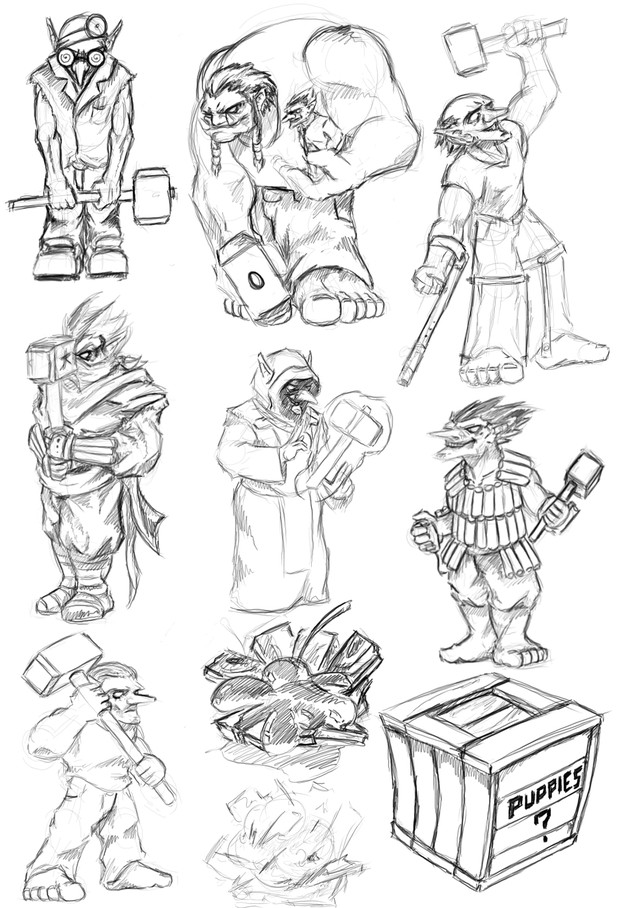 1: Mr. Sparkles
With a spring in his step and pretties that sway
He will find all his old friends and blow them away
Meaning: If Mr. Sparkles is in a competition, he, and every Imp there, is blown up but not before scoring the crate. Mr. Sparkles resolves right before the Imps Go Home phase.

2: Lame Jim
He favors his chances, though he knows he's still wrong
For he deals out his best blow to disable the strong
Meaning: After matches are sent away, Jim returns the strongest from the meeting back home as he leaves.

3: Dr. Peepers
Super weak in a fight, though he'll scream and he'll hex
As he's limping away, he'll at least see what's next.
Meaning: Provided he survives the round, Dr. Peepers players get to see whether the next crate is a bomb or not.

4: Average Joe
He ain't very good, though he talks a mean jive
Least when the dust settles, he knows he'll survive.
Meaning: Average Joe can never die unless he's played face down.

5: Eldrich Dave
As with all freshly dead, their energy's still rife
Should the next round be won, Dave returns them to life.
Meaning: If this player wins the next round, regardless of it being a puppy or a bomb, the player gets to revive a dead Imp on their team.

6: Koga Maru
A man of the shadows, a killer quite slick
Though he kills off the weakest, he at least does it quick.
Meaning: Koga Maru, when placed face up, will kill the lowest valued Imp in the battle before his ability triggers.

7: Big Drew and Stew
Though not too much skillful, their trick is quite clean
Their only advantage that they're doubly mean.
Meaning: If played face up, Big Drew counts as 14 instead of 7.

Contest has been cancelled, so sorry. I'll try something like this again later. Sorry.
#ShareonCommunityBlogs
Login to vote this up!