2:56 PM on 06.25.2011 (server time)    0
About a week more, and I still haven't given up on Demon's Souls. In fact, maybe we're starting to reach a mutual understanding. I follow a kind of sine wave of pain/joy that goes something like this:

- Grind a bit on areas I know about.
- Venture meekly into a new area.
- Start off well, making some good progress.
- Get caught off guard and die. (Pay attention, you fool!)
- Maybe die a second time (without touching my bloodstain) for some dumb ass reason because I thought "Oh yeah I can totally make it back to my body--hey, what's this do!?"
- Make it to the boss, but choose not to go in yet.
- Go through the level again, maybe without too many problems.
- Go fight the boss. Possibly die repeatedly.
- Eventually beat the boss.
- Scream at the top of my lungs like there's no tomorrow.
- Eat a lozenege to repair the damage.


It's not a bad process, really. A bit of give and take. Of course, if I'm ever feeling optimistic, I need only talk to anyone, and they'll be all, "Oh yeah? Well, wait until the next area, where fifteen foot tall rune-inscribed metallic ninja hyper-skeletons quadruple wield flaming katanas that shoot lightning. And also lasers", which puts the fear of god right back in me (where, the game purports, it belongs). 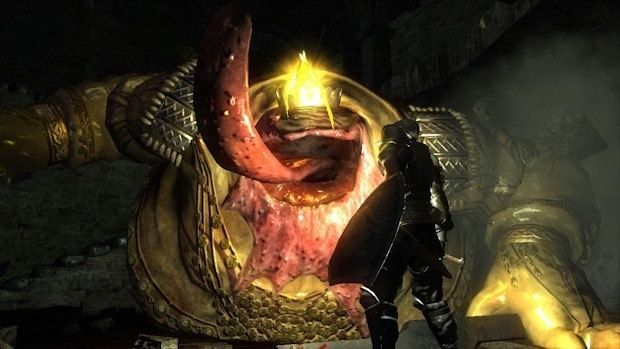 Doesn't his name sound impressive? I do love a good name like that. He was actually a pushover. Maybe my Dragon Longsword +1 helped ("dragon" = fire damage). Plus he was already crippled from the start, what with having a giant blade protruding from his side. I even killed him with melee only! His sideways swinging cleaver attack is telegraphed really openly and can be rolled under.

I will explicitly thank falsenipple here, because his real-time coaching helped me greatly with getting a handle on the Shrine of Storms at the beginning. Though, he laughed at my stupid mistakes too, so... I guess screw that guy? Dude seriously has a near-photographic memory of the entire map. I was impressed.

That's it for my daring exploits so far. Really, to all but the most diehard fans, this was probably pretty boring, wasn't it? I'll try to do better next time. Maybe. See ya.
#ShareonCommunityBlogs
Login to vote this up!