Over the years, I have always been the weird kid when it came to social cliques. In the techie nerd group, I never delved into Linux/Unix or programming or any of those things significantly beyond knowing what they are and where they are useful. I never got in with the TCG guys and played Magic the Gathering or any of those card games. I also rarely spent any time with the D&D nerds or any of the other tabletop gamers. I spent most of my time with the PC growing up, with some random consoles thrown in for good measure.

But the difference between non-digital gaming and other forms of entertainment for me, is that I occasionally would sit-in or spontaneously join my friends when they would have D&D night or some other table-top game. Some of the best times I've had gaming with others are the stories we can tell with tabletop gaming. I've just never really wanted to dive into it.

I've always been a fan of the Mechwarrior PC games and the couple of SNES Battletech games that came out. I also played both MechAssault games for the Xbox and enjoyed them immensely. I'll admit I've dabbled in the nerdiness of the Battletech universe numerous times throughout my childhood and adult life. There's just something about the idea of piloting giant walking war machines that has always kind of made me happy, like a kid walking into a candy store. I've read a bunch of the Battletech and Mechwarrior series books, beaten all of the PC games at least once and the console games. In addition, Battletech is on an upward trend again in popularity, giving rise to a new wave of official content and source material.

Recently, Catalyst Game Labs released a new introductory box set for the Classic Battletech tabletop game. This thing comes pretty well loaded with everything you could need to get started and keep playing for quite some time, too. That's pretty damned awesome if you ask me. 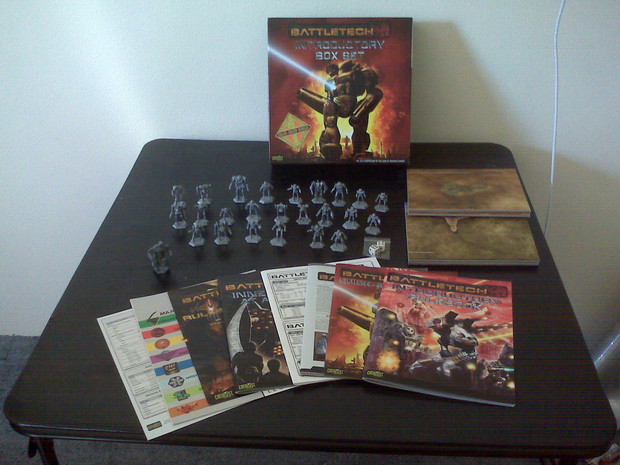 I started reading about the resurgence of Classic BattleTech's popularity amongst the tabletop community back in December. This got me interested and reminded me of all the times I spent gaming with friends around the table, rolling dice and acting out the role of some other character. Remembering the times that I'd spent drinking and talking about punching dwarves, then rolling a d20 to see if I hit, got me excited to pick this up. It's quite an investment though, with the cheapest one I could find being $80 USD with shipping from Amazon.

I put it on order and then talked my wife into joining me in learning to play the tabletop version of the game. For her, tabletop gaming is a whole new experience, which should make this a great time, in my opinion. In fact, she's agreed to play tonight, with the two of us planning to go through the "Green Training Scenario." Nothing too harsh or exciting, but a solid introduction to the game, if the starter guide is any indication.

This is really kind of a "backwards transition" for me. The evolution of gaming lead from the D&D games of old (think AD&D at release) and trading cards and board games into digital gaming. So with that perspective, this is a growth away from that evolutionary medium and direction. It's interesting because many of the older gamers in the community likely started with these mediums before moving over to the consoles and PC, but, I'm going the opposite direction. Maybe I'm just still being that weird kid, but, it is kind of weird to me. Not in bad way or anything, just kind of odd.

But, I want to explore this and see where it goes. How far will this take me into the world of "traditional" gaming and tabletop adventures? Will I meet some kind of super-nerds that I didn't know existed and become part of their quiet, hidden culture? Or will become a more like the guys from Big Bang Theory? Well, I'll keep you posted.

So tonight, I'll be exploring the world of Classic Battletech tabletop gaming. I'll compare it to my experiences with previous tabletop gaming, previous digital versions of the game and where it's going to lead in the future. All of which will contribute to the next part of this article.

Has anyone else here ever played the tabletop Classic BattleTech games? I'm curious to know and hear about your experiences. Tell me about it in the comments!
#ShareonCommunityBlogs
Login to vote this up!

I'm a highly opinionated gamer from the IT profession. I muck around with servers and Linux. I like to create IT projects at home to learn about things I'll never use, read some of the nerdiest news I can find and read about gaming. I'm also becoming an active blogger on the subject with my experiences and knowledge and hope to actually network my way out of my small box. I'm also exploring something I'm calling "reverse transitioning" from digital gaming to tabletop gaming. Also, I'm performing the grandest experiment of them all: My first born son will arrive in August.