Diversity what what?!?: Hookers Edition

Soo, one of the things that many magazines, critics and commentators of the gaming industry like to point to constantly as a sign of the coming apocalypse is the lack of 'diversity' in the games industry, they point at the top 10 biggest selling games of 2000 and whatever, and they go:

HMMMMmmmmm (you may want to imitate the sound yourself)..... THESE GAMES IZ ALLS SHOOTERS! BOOM BOOM!

Which to be fair, is true. Most of the biggest selling-game are shooters like Modern Warfare, or any Call of Duty, or Medal of Guns Covert Shooty guy Edition. There are a lot of guns in the top 10, and most of the games that sell lots involve you shooting stuff... and you're usually a white guy, or if that's not possible then a hot girl whose every other word is double-entendre intended to make her sound like a superwhore. Actually probably the only exception to that rule that I've found in a recent top-selling game was Aliens Vs Predator... and that game sucked. Still it was nice you didn't play John A. Whitey.

To be honest there's a reason it's like this: because that's what games company/movie makers/everyone else who makes anything, thinks we want. And they're probably right, but it does lead to a lot of sameyness in the games industry - with a feeling that there's a lot of mediocrity out there and that most developers just follow the trend when it comes to designing their games instead of striving to break the mould. But why are games like this???? Why can't everything be oriiginalz???????

I DON'T KNOW - actually I do, but I'm not going to explain it, instead I'm going to show you something that may blow your mind.

The games industry is drowning in it's own mediocrity so I've put together a selection of three great game ideas that could pave the way forward for revolutionising the games industry - if any games company even makes one of these then mediocrity will NEVER, EVER, EVER exist in the industry ever again and ummm naked ladies will want to sleep with us all. (yeah, they're that good). 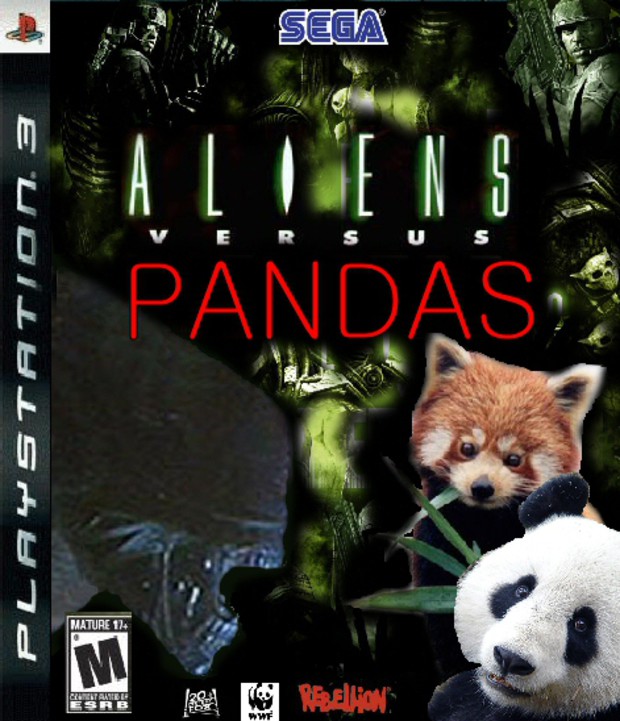 I feel like shooting people is a solid genre of games, we need it. Obviously we've broken some cliches, some old standards with Calculators, and Calculators 2 has improved on the original by miles and the profit from that will allow a company to push ahead and develop new IPs, but people still love shooting things and we need to cater to that. Thus I present Aliens Vs Pandas, a game that revolves around the ancient conflict between two species: Aliens and Pandas... with some guys with guns thrown in for good measure. I mean everybody loves aliens, right? And people either hate or love pandas, so they'll want to shoot or be them in some sort of giant historic battle!!!! And failing that you can be a guy with a gun.