Bioshock Infinite: Finding my own voice 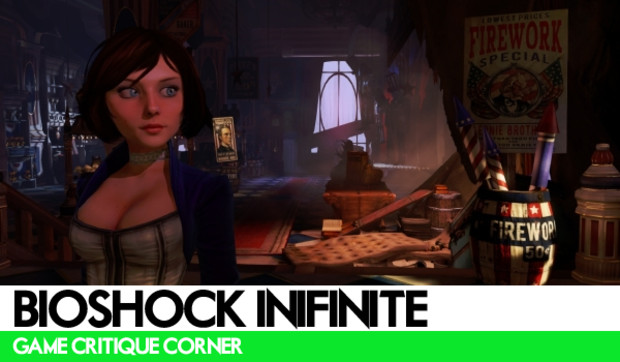 I think Irrational Games may do the impossible and make a sexually attractive female character actually have more depth than her cleavage. Just sayin’.

Bioshock Infinite looks to be Bioshock in the sky. From the massive reveal to the giant gameplay demo and now to the E3 curtain call there’s been a true sense of escalation. It’s the feeling that we’re moving away from Rapture, a place I’ve long loved, and we’re headed for the clouds. It’s a feeling of renewal and we’ve all grown older and played Bioshock 2 and find it a smoother gamey gameplay experience but a very weak story which was the original’s strength. The DLC of Minerva’s Den helped to remedy this by being perhaps a more powerful personal story than Bioshock but Infinite might just pull a Bioshock 2.

Let me explain myself.

Bioshock was so good because it was so player-centric. There was no middle-man and it does the absolute perfect job of easing you into a middle-man narrative that doesn’t feel cheap or forced like most video-game ‘revenge’ stories nowadays. As you assimilate powers and be absorbed by Rapture’s audio diaries and its art deco Ayn Randian atmosphere you become a part of Rapture. It’s so perfect then to have the plot twist be about you actually being from Rapture in the first place and Irrational played this off perfectly. They had you a voiceless faceless character become a proper character. The continued lack of a voice helped to still keep you in this world and didn’t shatter the player-centric attitude. It was as if player and player character were one.

Bioshock 2 is middle-man centric from the very beginning. The player assumes the role of a Big Daddy and has to run off finding a Little Sister he’s never met or cared about and by the end of it it kinda feels a little loose. The ending is much better than Bioshock‘s but it never reaches that same personal height because it’s so forceful in the way it tries to get you to care. It isn’t a personal story whereas Minerva’s Den is about a more literal discovering of the self and it becomes so elegantly and subtly delivered that it challenges the original’s way of storytelling. It’s stronger because it’s about interactivity and interaction leading to becoming the world.

So why does Bioshock Infinite frighten me? Bioshock 2 was not a bad game, it was a good one, but it wasn’t a Bioshock game. It frightens me because now you have a name by the get-go, Booker DeWitt, and more worringly, you have a voice. See this doesn’t usually annoy me that much but in a Bioshock game it just doesn’t feel right. Ken Levine (Creative Director of Irrational Games) says it’s because it’s something you think about “As you get older.” but I just point at the Valve guys and how they’ve revolutionized storytelling using the same methods but stronger technology practices.

Infinite‘s story revolves around a relationship between Booker and Elizabeth which the player has zero control over and this is the one thing that has me more worried than anything else. The lack of interaction in the narrative, a Bioshock narrative, may just disconnect the player too far. Elizabeth being all chesty and actually a deep character makes me interested in learning about her and talking with her but that choice isn’t even a thought for Infinite. It feels dirty in a Bioshock game to not be allowed to explore the characters at your own pace and I fear for some forced moments to come about that are all in the ‘cinematic’ namesake.

See I’m probably even more worried given the game press haven’t focused on this at all. Some of them say it’s a vast improvement or that it looks to really add to the experience. I’m exploring the whole “You play as” thing and its paradoxical nature in my new book but all I’ll say is that is completely blasphemous given it’s a Bioshock game. The adding of a player character who intrudes on my exploration of a Bioshock game is really annoying and perhaps having to listen to him go on about things that he knows or about what the right path has me waggling my finger. When a player character knows more than the player, or has more choice in the narrative, then something is wrong.

It’s not that the narrative faults itself by having a voiceful protagonist but the fact that Booker never stops talking. I’ve heard from Ben Paddon that he also talks whenever you’re discovering something interesting or doing the typical Bioshocky exploring of the wonderful environment. One thing strikes me odd here in that I can see where they’re coming from and it makes sense. Somehow Irrational perhaps thinks the player needs to know they’ve discovered something or for the game to give them their satisfaction rather than actual players self-satisfaction which is infinitely more powerful. I am oh so worried about that part given it’s a Bioshock game and leads the charge when it comes to storytelling conventions and whether or not it’s sedated in the final game is up in the air.

Bioshock is one of my favourite games of forever for the sole reason that it let me feel like me in a world under the sea. It was so good and brilliant in its narrative, so fleshed out and smart and and and it’s so good. It is so good to the infinite degree and I don’t want that magic ruined by some horrible ‘When you grow old…’ design retakes. I am completely against player characters having a bigger role and say in the world than I am, the magic of Bioshock is finding my own voice and exploring the world myself and not having some bozo do it for me.

More importantly I am worried about the game critics such as Kotaku who will praise it with such phrases as “This is what video-games should be… play and parable.” which completely denounces any ounce of player empathy necessary to a video-game’s storytelling and also seeks to ruin all of interactive storytelling. Someone on Blogossus once commented that ‘interactivity should stay in the gameplay’ and I could not disagree and actually feel offended by that more. Video-games have so much potential and if you want an example of interactive storytelling done blissfully right then look at Shadow of the Colossus, New Vegas and… Bioshock.

If the gaming press through their heads up and say “This is an amazing story and it’s all thanks to the player not having a role.” because they totally don’t get what made them enjoy the original so much then… we’re in for a much longer time of fighting traditional video-game storytelling methods.

Please, Ken Levine, scale back the voice and give me some choice. I think dialogue choices in Bioshock might just improve the experience and help me relate to Elizabeth more, which is exactly what you want me to do right? I want to grow to like these characters, not fight for interacting with them with my player character.

(If this blog passes under Ken Levine’s nose, somehow, I will be grateful. Tweet him @IGLevine and track down his email. I would love it for him to clear up some of these issues. To my Destructoid commenters: perhaps pass this on to the DTOID staff to raise up with Mr Levine the next time they see him given I’m trapped in England. I’ve tried Tweeting and trying to find his email to no avail. I really want Infinite to be a true Bioshock experience and for every fear above to be just an over-reaction. Thanks in advance and if you yourself Mr Levine are reading this then do feel free to email me at [email protected] or tweet me @Nathsies to clear stuff up. You’re one of my video-game heroes, please don’t fall from grace good sir, I don’t think our beloved industry can take it. Much love.)
#Community
Login to vote this up!