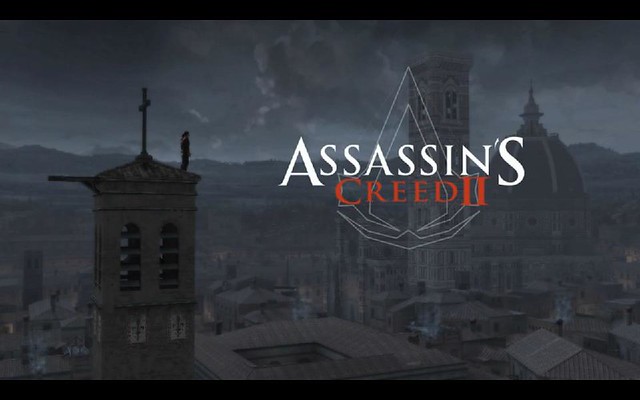 I've played a lot of video games over the years (more than I'd care to admit!), but no other series has captivated me like Assassin's Creed has. The creators of the franchise, Ubisoft, have put an enormous amount of effort into the series. The graphics are top notch, the controls are fluid and responsive, and the story is very deep, well written, and engaging.

A specific point of the story that has really grabbed my attention is the development of Creed II's main character, Ezio Auditore. At the beginning of the game, Ezio is a snotty nosed, ignorant rich Florentine teenager; the son of a wealthy banker. Check out the following linked video to see one of the most moving moments of Ezio's early days: http://youtu.be/Ps7G0Qtw-TE

Already at this point in the story, Ezio, his brother, and their friends have gotten into a street brawl with a "rival family," and have climbed on top of many buildings, and are standing on the roof of a church, looking down on Florence. Such things are very unprofessional to say the least, and judging by the conversation that takes place atop the church (and Ezio's plans for the immediate future), there looks to be no changes to be made.

Time for a little insight into the Assassin's Creed universe. Assassin's Creed tells the tale of the struggle between the Knights Templar and the Assassins, both of whom are attempting to attain world peace. While their goals are similar, their methods are anything but. The Templars seek peace through control. They would, if given the opportunity, silence all their opponents, and then instill their personal brand of conformist reality onto the world, thus eliminating conflict. Conversely, the Assassin's believe that freedom of thought and a more universal understanding of the world will bring peace. They admit while although it is risky and there will always be opposition, the Assassin's view of the optimal world leads to true freedom and harmony. Either side can be interpreted as correct, but both are but pawns in a larger universe. In order to attain their goals, both groups seek out "Pieces of Eden," relics left behind from a more advanced, pre-human civilization. These artifacts contain the collective knowledge of the world, in addition to activating the hidden potentials of the one who possesses it, namely, telepathy, telekinesis, the ability to create illusions, etc. In the modern day story, a contemporary Assassin, Desmond Miles, is using a machine called an "animus" to peer into his ancestor's memories to locate these objects. At the same time, a corporation known as "Abstergo Industries," which is comprised of modern day Templars, is using the same technology to do the same. In the modern times, the Assassin's seek to either hide the Pieces of Eden from Abstergo or destroy them, while Abstergo wishes to harness their energies through such mediums as television and radio to control the general population..One can see why these objects are so desperately sought after. (It's the ultimate story of hipsters vs. THE MAN lol)

In Assassin's Creed II, Ezio's father is discovered to be an Assassin by a local Templar in a position of power, Uberto Alberti. As such, he is framed for a crime he did not commit, branded for treason, and executed, along with two of his sons. Ezio, who is away on errands at the time, is able to escape capture. When he finds out about Uberto's deception, naturally, he wants revenge, starting his journey down the path of the Assassins.

In this video, we see Ezio accomplish that goal. He tracks down and kills Alberti brutally in broad daylight, and then announces his survival to the surrounding public. If Ezio wasn't a wanted man before, he became one, and thus needed to escape. Although he succeeded in his short term goal of vengeance, he has thrust himself into a much larger world, one of murder and betrayal, but also brotherhood and dignity. Ezio spends the next few years hunting down and eliminating various Templar authority figures all over Italy, eventually "earning his stripes" and officially becoming an Assassin.

It's at this point in the game where the extent to which the Templar order has infiltrated society's structure is revealed; the Papacy has been claimed by the leader of the Templars, Rodrigo Borgia, known throughout the game simply as "The Spaniard." It is also revealed that a mysterious figure, known only to the Assassins and the Templars as "the prophet," will make himself known and will heavily influence the foreseeable future. Rodrigo believes himself to be said person, while the Assassin's believe Ezio to be the prophet.

Eventually, Ezio confronts and defeats Rodrigo in the Vatican. He then displays a new outlook on his role in the world. Unlike the killing of Alberti, Ezio does not disrespect Rodrigo or make a scene. He simply leaves his defeated opponent and continues on, now a master assassin in both skill and mindset. He then uses his Piece of Eden, as well as Rodrigo's to open a hidden shrine dedicated to the former civilization prior to human existance. This is where the true nature of the moniker "the prophet" is revealed. Ezio is but a pawn, meant to find the shrine, but not act on its warning. The warning is meant to be heeded over 500 years later by Desmond, who is to view these events through the animus. (This goes to show exactly how powerful and knowledgable the previous civilazation was!) Clearly, Ezio is angry and confused, but he has no choice but to leave empty handed and no more knowledgeable than he was upon arrival. These events can be viewed here.

Years later, Rodrigo Borgia's son, Cesere, has been attempting to gain dominion over Italy. Like his father, Cesere is a Templar, so he is clearly a target of Ezio's. Along the way (in what is a DLC side-quest in Assassin's Creed Brotherhood, the sequel to Assassin's Creed II), Ezio and Leonardo Da Vinci come across another hidden temple of the previous civilization. This time, Ezio doesn't act surprised. He solemnly observes what this particular temple has to offer, and then returns to his current task of weakening the Templars of his time; understanding the fact that while he may be a pawn in a larger series of events leading up to Desmond's final goals, he must still set the stage for those events to play out. He then returns to the task of eliminating the Borgia from Italy, while taking a renewed interest in the works of Da Vinci.

As powerful as Ezio has become, the series begs the question "how would Ezio's life had been had he not become an Assassin?" Assassin's Creed Brotherhood shows that while Ezio has become arguably the most influential person of his time, he had very humble beginnings (in comparison), and often reflects upon them. In the very first video I posted above, Ezio visits a romantic interest of his, Cristina. Throughout Brotherhood, we play through what are flashbacks of later interactions between the two, ending with Cristina's death. As Cristina dies, Ezio mournfully says "Requiescat in pace" (rest in peace), just as he does when he kills a target. Clearly, he is regretful of leaving her behind, but cannot seperate himself from the life he had been forced into the moment he killed Alberti.

Later this year, in November, Assassin's Creed Revelations is scheduled to be released. Although it will have the awesome multiplayer that ACB introduced, fun ways to eliminate targets, fun gameplay segments, excellent graphics..it will ultimately be Ezio's final chapter that makes the game what it is. I hope that Ubisoft does not disappoint on the conclusion of the story of the character who has become my personal favorite in ANY entertainment media (game, movie, book, etc).

Also..I'd like to simply state that Altair has never been NEARLY as fleshed out as Ezio has been. Also, within the first few hours of AC2, Ezio is already a more capable killer than Altair is at any point in AC1 who happens to be a master assassin. Face it, Ezio is awesome, Altair sucks.
#Community
Login to vote this up!

My very first video game was Star Wars: Shadows of the Empire for N64. Admittedly, I never finished it, but that one game led to me getting more N64 games, namely The Legend of Zelda: Ocarina of Time and Super Mario 64, which hooked me on games for life!

Nowadays, being a little older, I find myself playing mainly RPGs like Pokemon, Final Fantasy, and Golden Sun (my personal favorite game of all time is Golden Sun: The Lost Age). I do however enjoy the occasional FPS game like MAG and Resistance, TPS like Uncharted and Red Dead Redemption, and what I'll call "massive content" games like Dissidia and Monster Hunter Freedom Unite.