"Despite promises from EA/Bioware that the title represents a major step forward in MMO design, what we saw was essentially a World of Warcraft clone with Star Wars character skins and the BioWare RPG nice/nasty dialogue tree mechanism bolted on for non-player character conversations." 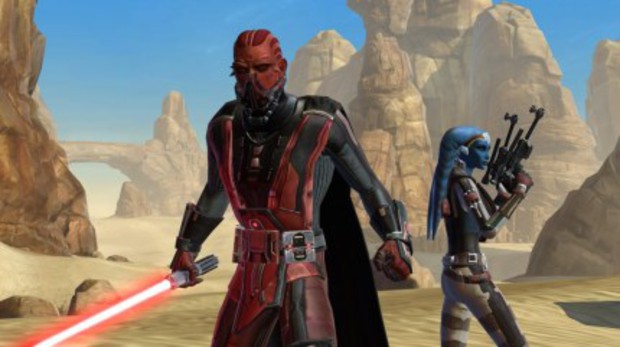 Eurogamer sought a response from BioWare's Ray Muzyka and Greg Zeschuk, who said they were confident in the title and wouldn't have given it floor time if they weren't. Far from a knock-off, Zeschuk says:

Zeschuk went on to rebuff claims that the game won't be released until 2012, saying, "In a formal sense EA's guided towards this calendar year."

"Guided" isn't the most reassuring language. And given some of the criticism and negative comparisons to WoW, it wouldn't be surprising if BioWare takes some more time with the title to get things right.
All of the trailers for this game have me psyched, but I'm not necessarily expecting Old Republic to be the next advance in MMO's (for that my hope lies with the integration of EVE Online andDust 514).

What is anyone really expecting other than to have fun in a massive online Star Wars universe with your uniquely crafted character? The only thing BioWare really needs to do to succeed it just do no harm. Being "highly derivative" of a very popular game isn't such a bad thing. Of course, being a really poor derivative of a great game is.
#Community
Login to vote this up!