You're Not A Real Fan

10:18 PM on 06.13.2011 (server time)    0
I got into a rather interesting discussion with a friend the other day. It mainly had to do with the concept of being a fan, and how I'd told her she wasn't. She argued with me about the matter, and we had a smashing good time going back and forth about the nuances of the word. She's been studying as an English Major, and I have common sense, so it was pretty even.

Basically, what it came down to was thus: She said she was a huge fan of a certain game series. She'd written fanfiction, cosplayed at conventions, and basically she had, at any point in time, a near-encyclopaedic knowledge of the 'canon' of the games and could be relied on to be a walking FAQ for the games released thus far. I, on the other hand, do not have this knowledge. I don't write fanfiction. I have never even cosplayed, for which I'm pretty sure I'm grateful.

In spite of this, I contested that I was the bigger fan of us two. She took offence to that, as I imagine a lot of people are shortly going to take offence at what I'm about to say: Basically that if you're truly a fan of something, you'll show that support monetarily to the creators. 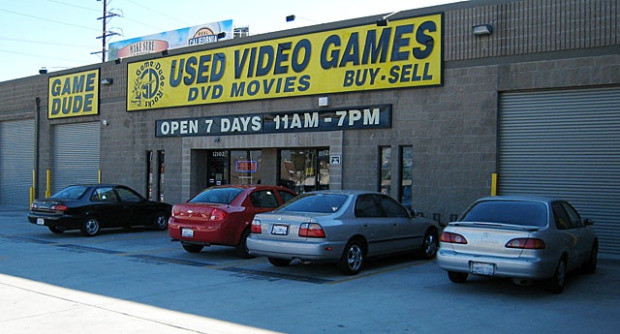 This doesn't fucking cut it.

Now, the thing is, she'll spend a hundred bucks to get the materials for her costumes for the next convention, which she'll dutifully spend hours sewing to get just right. She'll spend the time writing stories about the characters, and poring over the related TVTropes page, and basically spend some time obsessing over the story and games each week.

What she won't do is spend a dime more than she has to to play the games. If a game comes out, she'll buy it within the first week, but she'll buy it used at the $5-$10 off for a used copy, and she never, ever buys DLC. Even if she picks up a copy of one of the games for fifteen bucks, she won't spend an extra buck or two to tip the creators.

Don't get me wrong, I do think used games have their place. Even I don't buy every game new, because god knows I don't want to sink my money into another Onechanbara or Superman Returns at full MSRP. However, if I find that a game I bought used has occupied significant amounts of my time, even if the only thing on offer is avatar costumes for my 360 or something, I will spend a few MS Points to pick it up and show my support.

Then I'll buy the studio's next game at full MSRP, because if the studio is producing a game worth the time to play, it's worth my time to support them. I'm not saying this hasn't burned me in the past (hi, Vanquish!) but I do feel that a true fan of any hobby should not only spend their time obsessing over their favourite material, but support it monetarily.

Because the same fans who bemoan how they won't get a sequel and bitch about a studio being shut are often the same idiots waiting for the games to drop in price, be it used or whatever. I've lost track of the number of times I've heard someone say "I'm a huge fan of X!" only to look shocked when I ask them if they've ever bought X new, like the thought was unthinkable.

Basically what I'm getting at, I guess, is that it doesn't matter how many novels you write or how much you dress up for conventions, the true measure of your support of a series is how much of your cash makes its way back to the creators.

Non-monetary 'support' doesn't make you a fan, it just makes you obsessive.
#Community
Login to vote this up!