1:01 PM on 06.09.2011 (server time)    0
So I snuck into E3 a day early this year.
I work downtown LA right near the convention center. I thought I�d check out E3 for a little bit, so I walked on over. This was on Monday, June 6th. After checking out the lobby and seeing security guards in the front, I walked around to the loading area. Behold, a giant dock with open service doors. Don�t mind if I do. Strolled right in like a bawse. (Guys, if you ever want to sneak into places, walk with confidence and walk towards a big group of people. Everyone will get sheep mentality and no one will stop you. Feel free to say high to them too.) 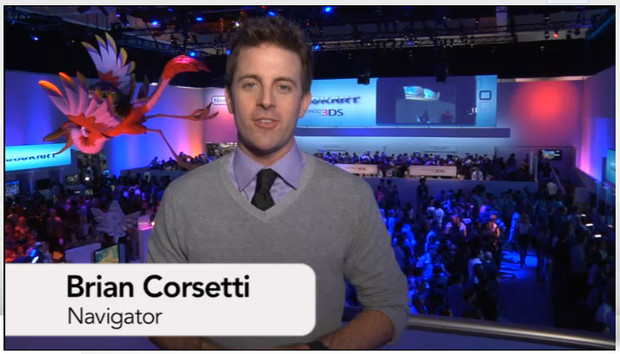 I'm pals with this guy. No real relation to the subject at hand.

Come on everyone, the PS Vita is a mash up of a PSP and a DS. And didn't they announce it a while ago as the NGP? So what's new about it now? The name only Chad Concelmo likes and a price ($249 does seem like a good deal though). The Wii U is an HD Wii with a tablet. More Kinect BS, HD remakes, and a bunch of sequels (when was the last time so many 3 games came out? Serious Sam 3, Battlefield 3, Mass Effect 3, Sims 3, Gears of War 3, Resistance 3, Uncharted 3, Ninja Gaiden 3! Holy crap has the industry run out of ideas or just wants to cash in on old properties? Yeah, both I know. Also, special recognition has to be given to the sequel Two Worlds II, which I find super funny for no real reason.)

You know that stupid Direct TV commercial where the dude is walking around his house and watching aliens fight while he keeps pausing it and going to another room to watch it. Its supposed to represent being able to watch one show on you DVR from anywhere in your home. Well, unless you have a mansion that you use a golf cart to get around, who cares? I feel the same way about Wii U. Now I get if your house has one TV and 39 sisters who all love to watch The Little Chocolatiers after school, but who really wants to play an HD Zelda on an iPad? That�s like watching Lord of the Rings on an iPhone. Same with the Vita. Maybe the touch screen capabilities will be cool and bring new dimensions to games (probably not), but not with games that are Tranfarred (or whatever they�re calling it). You can�t �transfar� the touch screen controls, so your basically playing HD games on a tiny screen. Same with Wii motion controls for the controller thing, right?


This is what your 39 sisters love to watch.

HD remakes are cool because they allow us to revisit some of our old favorites with new technology and better graphics, but they�re not new games. And don�t be fooled by people who say they�ve never played them, because even they have knowledge of the games events, controls, and maybe the endings. HD remakes are cool and all, but imagine if they just put every old movie on Blu Ray and didn�t make any more new films. That�s kinda how I feel about this year�s E3.

Maybe my expectations were too high? Maybe I expected to see a new Nintendo console and not a baby step up from a wii. Hd graphics mean little to me if there's not an interesting game behind it.
I expected some new exciting games. Sure, some of the games were exciting, but nothing is new.
I expected to be blown away by something. Last year it was DK country returns. I was going ape shit when that was annouced (how that turn out for me though). Nothing stellar is coming down the pipeline as of now. And I know that the Wii U has a long time before it comes out (prob not even before next E3), but it won't be revolution the Wii was. And does Nintendo really need all the ports from Microsoft and Sony's consoles?

Have we hit a wall? Is there nothing else that can be achieved beyond motion controls and HD visuals? Do I really want an iPad that can only play games (as far as we know)? Will cloud technology/transfarring really make things better?
Its the same old song, they�re just trying to say there�s a different meaning but I think they�re wrong. I, oh I�.
(I hope at least Kraid get that reference, its not too obscure!)