Sony's Apology: In Which a former preacher becomes an apostate 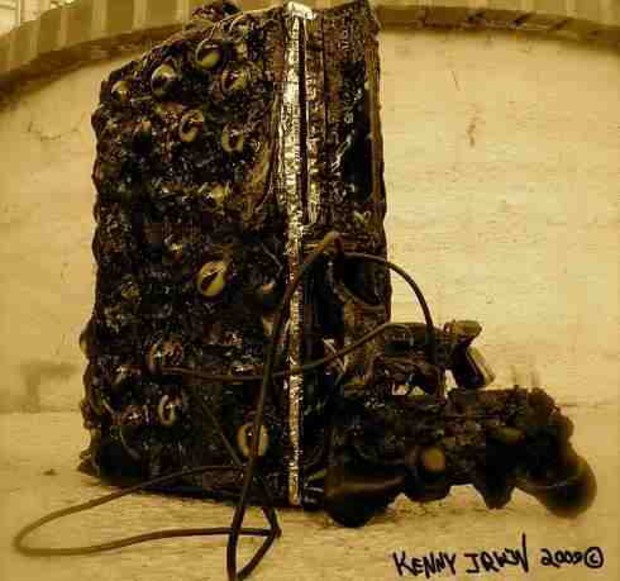 Only the fact my PS3 cost me quite a bit of money keeps me from nuking this fucking thing right now.

Alright, allow me to lead you on a brief series of events.

So, I decided to download the first game of Sony's apology to us, the disenfranchised customers, which Sony is using to woo us back and keep us from abandoning the system entirely. I decided that hey, Wipeout looks pretty cool, and I've got fond memories of the game from the PS1 days. So I picked that for my first game, and lo, did it give me a prompt:

And clear at the bottom was Download All. Which I clicked, and then went and did something else for a bit.

Now, let me clarify something. I've bought maybe two or three games on the PSN. At most. Nothing exclusive they have has interested me much, and my multiplatform sensibilities clearly lie in the Xbox 360 direction, so I've not yet learned the rules of the thing, but whatever. I'm relatively new to the whole PSN downloads thing.

So I download the title, and I actually chuckled a bit in resignation when the inevitable Install screen showed up. With a bit of a shake of my head, I clicked okay and got up and grabbed a beer. I got back, waited for the installation to finish, and clicked the X button right as I popped the top on my beer, ready to settle in for some HD Wipeout.

I'm taking my first sip when the fucking Update screen hits. I nearly spit my beer out in disbelief. I just fucking downloaded this game. Why the fuck do I need to update it right now? But then I noticed the fact it was three updates, and I thought: Aha! I can hit this button and Demo, Full Game Unlock, and Fury components will all be melded into one seamless whole. Then I can get some Wipeout HD goodness, you can tweak my gamer hind-brain, and I was certain all would be forgiven.

So the update finished.

You are missing a vital game component. Please proceed to the Download Page of the Playstation Store to continue. Well, it was basically that. I don't fucking remember the exact wording, but basically all the shit I'd done thus far wasn't nearly enough to appease the black fucking monolith into letting me play the fucking game.

I was one of your biggest supporters. I've got a closet full of PS2 games. Literally 500 titles or so, and more than half of them were purchased new. I stuck with you through your mishandling of the PSP, since it was a pretty cool console and didn't afraid of anything, least of all the dual-screened upstart which outsold it two to one.

But this is the final straw on a very burdened camel's back.

I just want to play my fucking games. I don't want to navigate endless menus and sit through installations or any of this other bullshit. I'm officially done. Any first-party games you put out, I'm buying second hand just so I don't contribute to your sales figures. I'll advise all my friends and coworkers to avoid you. I'm sick of it, Sony. Entirely sick of it.

I don't want a console which wants me to jump through hoops before I can play. I don't want to have to sit and pretend I care about your updates and your installations just so I can do what I want with you. I want to sit down, turn you on, and then have a bit of fun. That's all I want from you, and you can't even give me that. Every time I try to do anything with you, it's a fight.

I'm breaking up with you, Sony. I've loved you for so long, but I just can't take it any more. I want to love you, flaws and all, but you're too much of a bitch right now. I'll check up on you in a few years, and maybe then we can talk about getting back together.

I'm sorry babe, it's not you. It's just Microsoft being so much sexier and easier. You know that's all I want, and she does what you simply won't do: Show me a good time.
#Community
Login to vote this up!