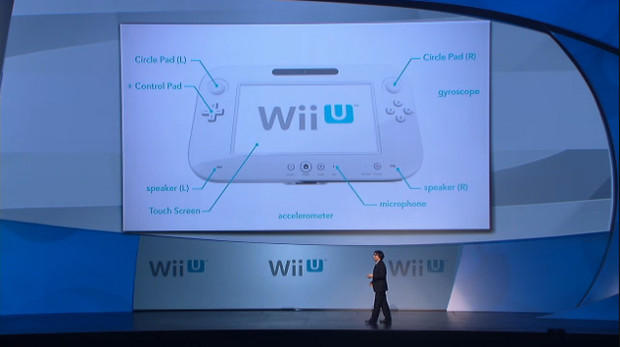 It didn't take long for the Nintendo haters to come out of the woodwork after the conference this morning -- "Oh, the controller is going to cost so much, oh, it's uncomfortable even though I've never used one, wah!" Well I'm here to tell you that I think this couldn't be farther than the truth, and I think Nintendo's new tablet controller may be one of the best control solutions we've ever seen.

You know what excites me about Wii U the most? The fact that they NEVER ONCE showed more than one tablet in the same room. This tells me that you’ll only ever need one tablet, no matter how many people you’re playing with – It was always one tablet and four Wii Remotes. This means that people don’t have to break the bank spending money on controllers, since they’re all backwards compatible and the one necessary tablet comes with the console. For all intents and purposes, it’s literally just a Wii HD, which is EXACTLY what Nintendo needed to do (Did you see the Zelda clip? GAWD.).

And speaking of controls, those people worried about more waggle shouldn't worry, either -- If most games use the traditional controls of the tablet controller and Wii U supports the original Wii Remote, wouldn't that logically mean that the original Classic Controller is supported, too? All you lose is the screen, and something tells me you don't actually REQUIRE the screen to play a lot of those games, especially the multiplatform ones.

This is obviously all just my own speculation, but I sincerely would bet money on it. One tablet, four Wii Remotes, and everyone is happy. And games like Arkham City, Assassin’s Creed, Ninja Gaiden 3... It’s Nintendo’s answer to the 360 and PS3, but they take it a step further with the shared tablet. This is truly an HD version of the Wii, but with more traditional controls.
#Community    #Wii
Login to vote this up!