3:01 PM on 06.05.2011 (server time)    0
Yesterday saw the national launch of a new CCG called Redakai. Flashy, Gimmicky, and expensive, how does it stack up in the market as a whole? Ultimately, it depends on the type of gamer. So sit back, relax, and read up on the latest CCG the day before E3 floods you with those “other” games.

Redakai comes in several flavors for your gaming needs. Like all CCGs, there is a small assortment of prebuilt decks (four in all), Gold booster packs, Power packs, and the Championship Set. The prebuilt decks include 43 cards, (referred to as X-Drives in their alien language) the gold boosters include 6 cards, power packs include 11 cards, and the championship set has 44 cards + trays, deck holder, and hand shield. Before going into the differences, perhaps I should explain the rest of the game.

The game is divided into three cards, all with unique gimmicks. The character cards give you your base defense, your health bar, and a unique ability. These cards are the only completely opaque cards and, in the most advanced game, you need only three of these in your deck. You see, the other cards stack on top of your character cards. Since parts of these cards block details below, you're constantly attacking or modifying the base values of these characters.

But the characters are not completely defenseless. In fact, turning the characters into monsters is the final core mechanic. By paying the casting cost, you can place a monster on top of a character. Some monsters dramatically increase defensive values, some even heal health bars, and grant new abilities. In essence, these are the mechanics that drive Redakai. But there is also the aspect of, well... I'm just going to say it, these cards are fucking cool. All characters and monsters are 3D lenticulars. All attacks are animated lenticulars. Non effect portions of the cards are often transparent. So the mechanics of stacking (nothing new in card games, just more rare than not) become central to the game. The other potential issue is, since the only “enhancement” card you can play on your characters are monster cards, that means retrieving cards after combat is easy. But this also means, should buff cards be introduced in later games, cleanup will become more complex.

So with these mechanics laid out. Let's look back at the options given for acquiring this game. First, there is the prebuilt decks. Open them, play. Can't get simpler. Next is the Power Packs. Sold for around $8, a Power Pack is basically a character in a pack. At the cheapest entry, each player can buy a Power Pack and take on players in 1 on 1 matches. Next is the Gold Packs which go for about $6. Included in this is 6 cards, two of which are rares, one of which is a hobby store exclusive rare. Gold Packs will be producing more money cards than Power Packs but Power Packs are guaranteed to have at least 1 character (and the only Super Rare I pulled was from a Power Pack, take that how you will).

Finally there is the Championship Set which, if you're going into Redakai, this is where you go. Runs around $35 and includes a deck of randoms, an exclusive character, and all the nifty plastic pieces which are basically necessities to this game. The first thing is the tray, opposing trays snap together and they line up cards played on top of other cards. Next is the Blind Draw Deck Box. Because the cards are translucent, looking at the deck could easily tell you if you have attacks or monsters coming up and you can plan accordingly. Blind Draw hides you deck, mostly. Plus, it's thematically cool... c'mon. Finally, there is the Hand Library which, well, holds you hand AND tracks your energy (or Kairu in their ancient, dead language). 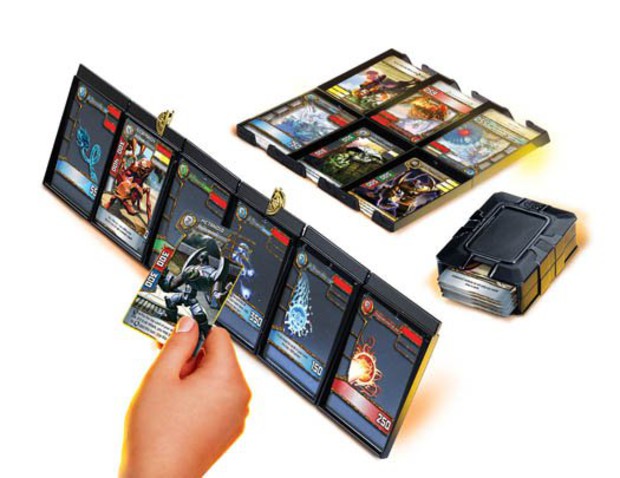 The verdict is given after having played 6 games with only one stalling. Redakai is a simple game and, provided all you want is simplicity, is a great game. Because of it's nature, it doesn't invite very advanced deck building elements aside from your card balances. You CAN focus on themes, of course, but that's kind of like drawing elaborate battle tactics for Yahtzee. This game is better enjoyed as a “sit down, shut up, and play” type of CCG. Because of this, it works as a great intro to CCG mechanics or a breather from something much more intensive like Legend of the Five Rings. Provided that's all you're looking for, Redakai delivers. But that's a very limited field and, should the cartoon not pick up speed, expect Redakai to die quickly. But cartoons can work wonders as Bakugon and YuGiOh (a game so horribly unbalanced, cards are frequently banned from tournament play before they are even released) can attest. Redakai certainly has the “cool” factor that could keep it around for years, making me curious just how they can expand these base mechanics. What MAY help it's hobbyist appeal is that game and hobby stores have a two month exclusive and a subset of 20 cards you can ONLY get from hobby stores. Walmart will never get these cards, and that's a boon.

Did someone say Contest Winner? As you can see from the video, Master Snake has won the copy of Lords of Scotland. As of right now, I'm not giving away Magical Athlete or Burrows... yet. They'll be announced like Lords was, at the end of a future board gaming blog post. Congratulations, Master Snake! Hope you enjoy it!
#Community    #NOTvideogamesrelated
Login to vote this up!