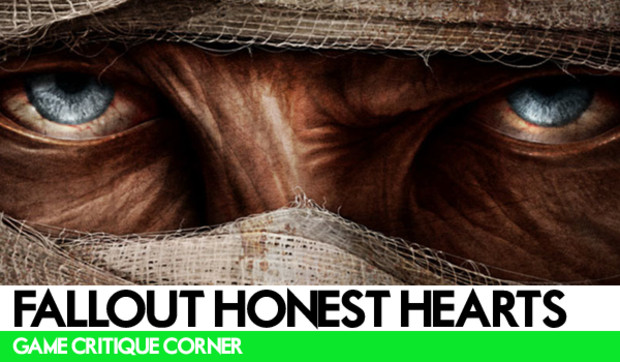 I reviewed Honest Hearts, the new DLC for New Vegas, a short little while ago and it became apparent to me a good length into the game that it wasn’t as good as Dead Money. It was a pleasant enough experience full of more visual charm, wit and some keen clever ideas about a certain scripture (hence the title of this corner) but it was otherwise a more… sedated experience. With Dead Money you couldn’t return to the environment after that excellent ending to a pungently charged, atmospheric downloadable chunk but with Honest Hearts you can return to this blue sky thinking (literally) world.

This isn’t a problem, it satisfies closure with another ‘end cut-scene’ but it sort of dwells upon the mind about the parallels that were already been drawn within the DLC. The ties to ‘that scripture’ include a ‘Judgement Day’ which never really comes about and… that’s a good thing. See, this DLC pack was a little less hearty than Dead Money but along the same lines of clever. It comments on the bible in a way that I’ve never exactly seen before and does it through actual semi-game mechanics ways. Namely, game achievements, which all of which are lines of the bible.

Two of these lines relate to the same paragraph. They both mine opposite things – “May my Hand Forget its Skill” means to be loved, whereas “O Daughter of Babylon” relates to a verse detailing revenge – both of these are the ‘game accomplished’ achievements. See, it’s odd given that this shows the bitter hypocrisy of the bible and I can already feel one million militant atheists high-fiving each other, laughing and revelling in their ignorant elitism. What it shows instead, I believe, is that the world of New Vegas is the world of the bible; confused.

Fallout 3 revolved around a shoddy poke at the bible with the passcode to the ‘The End’ scenario being a bible passage. I didn’t like it, it kinda felt shoved in, but here in Honest Hearts we have characters talking about the scripture (or a spin on the scripture) at the drop of a hat. I like this. I really, really like how deeply enthralled into a religion I can get. I really, really like it when those ideas of exploring the religion are hammered lightly into me with some aspect of video-gamedom. I really, really like it when I’m not asked to be good or evil at the end of a video-game and that’s exactly what Honest Hearts is.

Honest Hearts asks you to determine the fate of Zion in the ending which aptly reflects the bible parallels with Jerusalem also being another word for Zion. We’re playing with scripture here, not bound within its words but playing along with it. When a game lets you decide whether religion itself is inherently sinful or graceful then that’s when things get clever. Players themselves may choose to see some of the games characters as hypocrites as they side with you on either flip of the coin. It’s a shady, blissfully grey world of morals painted under an otherwise blue sky.

The world of Honest Hearts itself is a giant canyon that stretches into nooks and crannies and giant monsters that are recycled from the main game. It’s otherwise a dull gameplay scenario that trudges along with atmosphere, character, smart level design and other bits and twists. It’s odd then to not see the above scripture relevancies pushed into our mind through our hands. Shooting God in the face would be stupid and there’s already dialogue interaction to save some of the disconnect but it’s otherwise a runny runny shooter shooty game either choice.

It’s a shame since a mix-up in this, perhaps lowering your weapon and marching towards the bad guys unarmed and readying the dialogue options. Or perhaps mixing that up with actual tests of skill with a game of Chess or checkers or something that’s already in the game, Caravan. Bargaining an entire civilisation in a card game, now ain’t that tense? It even re-enforces the scripture given gambling is a sin and you can pretty much drive it further home by having the enemies start mouthing some biblical language that sets to go against the ideals that you chose.

That’s game mechanics used to biblical proportions and Honest Hearts already does this to a fair degree. If they pushed it into this giant self-contained game mechanic fuelled narrative arc of exploiting the scripture to tell a story, make the player think about religious ideology and push them in different ways then this could have been even smarter. It would’ve sunk all of that little heart into the clever bar and put it well in tandem with Dead Money. I’m beginning to discover all of these DLCs are self-contained messes of goodness with Dead Money talking about schizophrenia and now Honest Hearts being a little epic of biblical proportions.
#Community
Login to vote this up!