Not This Again! Skimpy Females in Video Games (Slightly NSFW)

4:26 PM on 06.04.2011 (server time)    0
Yes yes, I know. It's overdone. It's been talked about too much. We've already settled this: For some reason, it always seems that females get gimped on the actual ARMOR part of armor, or CLOTHING part of clothes...And it just doesn't make any sense. But why I'm bringing this up now is because it's well...Now! I thought that we all, as a society of gamers, concluded a long time ago that skimpy coverings on female bods was impractical, silly-looking, and to some, a bit insensitive and offensive (sometimes).

So why are we still seeing it in games today? 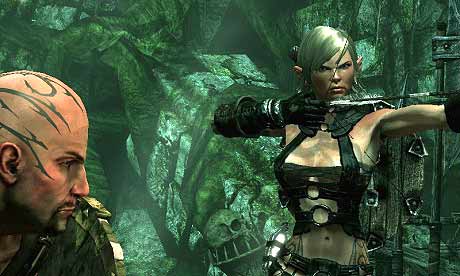 Maybe some game developers just haven't gotten the message. Maybe the message just hasn't permiated that upper level quite yet, but it still bugs me that it happens. What sparked my need-to-blog was the above picture that was in Dtoids review of Hunted: The Demons Forge. It's not like I followed the game, or really cared much about it, but I read the review, and looked at the pictures, and it just hit me: I don't understand WHY we need to have our video game women all skimpy and sexy-like.

Nowhere is this more prevalent than MMOs. Go play a fantasy MMO: Chances are, the female characters will have skimpy armor and a sexy look to them. But why? Why do the developers of these games (And many other kinds of games, too), feel the need to make their female characters look stereotypically sexy? The obvious answer is that the developers feel the need to appeal to the lowest common denominator of men, to get them to play the game. But honestly? I don't think that in this day and age, that tactic actually works. I think we all got over virtual boobs in video games shortly after we turned 14, and realized that Lara Croft (And all her virtual assets), were simply not real.

Classy is possible, even with Lara Croft.

But even the woman who started it all is toning it down a bit. The above is the cover image for the new Tomb Raider reboot. While she clearly has a nice body and a pretty face, the artists of the game aren't pushing her skimpy atire anymore. Do you see cleavage in the above picture? Well, a little, but it's not prominent, and they clearly aren't trying to say "This is the New Tomb Raider...AND LARA'S BOOBS ARE BIGGER THAN EVER!!!". Whoever's developing this franchise is making a clear decision to focus more on Lara as a character than as an object to be admired. And I think this is a good step that needs to be acknowledged more in today's gaming world.

The most important thing to take away from all this is not that we're seeing less woman-skin (and BIBLES and AMRRKA!)...It's that we're slowly starting to learn as a gaming culture that we CAN have a female character without her being a sex symbol. We CAN have a female be appealing to an audience without being in something akin to a bikini.

By now, you're probably thinking I'm some kind of stuck up, no-nonsense, feminist, bible-thumping, sex-hating bigot who can't enjoy a game because it has some skin in it.

Quite to the contrary...There's a 2nd part to this blog.

There is a time and place for everything, my friends, and this includes skimpy, sexy, unrealistically-proportioned vijagame wimenz! The only time I tend to have a problem with a skimpy character is when they're supposed to be taken seriously, or are a serious character. If Fem Shepherd from Mass Effect was forced to wear a bunch of skimpy armor pieces, I would probably be a little angry...Because she doesn't need it. Shepherd is already an appealing character that would be degraded by being portrayed in that manner. I'm more concerned about that volcano than her boob size.

However, in a game like Mortal Kombat...I couldn't give two nip-slips if Mileena is wearing a skimpy outfit...Because it's f***ing MORTAL KOMBAT!!! The entire game is built around this totally fantastical, ludicrous premise that begs to be not taken seriously. If I'm playing Mortal Kombat, I'm reveling in the outrageous, outlandish world that it's set in. If all the female characters are wearing nothing but bacon on their nipples...I could care LESS...Because that's all part of the impossibly fucked-up world that Mortal Kombat takes place in. Same goes for slightly more down to earth titles that feature real human beings...Like Duke Nukem (And yes, I fully realize the irony of that statement). What I mean by that is that we're objectifying women in Duke Nukem to the extreme. Every woman in Duke Nukem is probably some busty, barely-legal bimbo begging for Duke's attention. Now, I'm not going to get put off by this because, again, it's not supposed to be serious in ANY WAY. They aren't trying to make Duke's babes into serious characters with deep backstories about how they came from nothing, and got into the stripping business to pay their way through college so her little brother might have a chance at getting out of the ghetto...

The whole problem I even had in the first place is when skimpy characters are supposed to be taken seriously; When a female protagonist that has a serious persona, a real backstory, and a compelling personality...Yet MUST be wearing next-to-nothing, and MUST have the body of a supermodel. Now there are probably characters out there that ARE serious characters, where the skimpy outfits and supermodel physique fit in to their characters (Bayonetta, maybe?)...But it doesn't always have to be there...And in this day and age in gaming...It shouldn't.

I hope I've made myself clear here that I'm not some bigot that hates sex symbols in video games, or can't take a joke. I just have an annoyance with some developer's choices when it comes to female characters.

P.S. I'll have a special "Day Before E3" Blog up tomorrow, if anyone's interested. I promise, you will not be disappointed!
#Community
Login to vote this up!