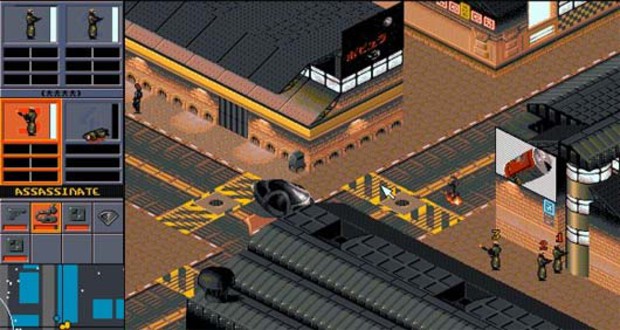 Syndicate's the sort of game that could benefit a lot from a remake today – afterall the two games (three if you count the expansion pack) revolved around thriving cities meant to contain thousands of individuals each with their own lives, jobs, families, priorities ...atleast in theory. Of course given the limitations of the technology the citizens would simply walk up and down the city and back and forth – and of course run away when you started shooting. They were simple to say the least, but imagine the potential a modern syndicate could have – obviously they couldn't have hundreds of unique individuals traipsing around the map but they could have something similar to what Syndicate Wars had.

Syndicate Wars carried on much like Syndicate, but included small 'scenes', parts of the game where characters were scripted to do certain things – at specific points in missions you could see gangs assemble, people 'talk' to each other, disagreements occur. Obviously at the time these were simple – characters would simply stand facing each other to imply they were talking, and there wasn't any visible dialogue but it's more the potential that's important.

If syndicate was remade you could have hundreds of randomly generated individuals on a map, with set-pieces, scripted events, small gatherings adding to the overall plot aswell as giving character and identity to each of the maps – each representing a different area of the world. With this you could develop a picture of the politics and culture at play in say the future Egypt, or Colombo, or London.

It wouldn't be perfect, even today there would still be limitations on the number of unique characters on-screen at any one time, but despite the drawbacks there would be the ability to craft a dark vision of the future in which gangs, factions, sects within each city have their own voice in the Corporate future of Syndicate – and each would play it's part not only in the events of the game but the narrative be drawn before your eyes. Agents could 'overhear' conversations, witness assassinations, spy on potential future operatives or sources of revenue, all of which could contribute to your ability to insidiously take power.

Another potential plus would be the inclusion of the rumoured First-Person Mode, in which you could use your agents as your vessel and experience the narrative first-hand – again this would add to the depth of the narrative and the experience, painting the dark, dystopian-future in even harsher colours.

Obviously there would be other advantages to a modern remake as retrospectively speaking Syndicate can feel quite simple in terms of depth of play: A range of weapons, each useful for different missions – sniper rifles for assassination missions, silenced pistols for stealth, shotguns for intense action; items with specific uses – say a radio-jammer to eliminate the chance of reinforcements in an assault missions or a 'City Administrator Identity Tag' to allow you to pass through areas without suspicion or inspection when trying to be stealthy; cybernetics with different uses – long legs for jumping, spindly legs for high agility, powerful legs to hold weapons and for armour, positive and negative effects of different implants on your agents abilities – possible addictions related to the use of different implants, aswell as the individual effects of implants on a specific agent's physiology.

Aswell as this though you could add levels of depth like levels of awareness for potential adversaries – 'Alert', 'Aware', 'Passive', much like in games like Metal Gear Solid security guards, soldiers, and other syndicate's agents could have a level of alertness based off reacting to events around them aswell as any intel their faction may have about the likelihood of any attack during the timespan of the mission. The player would have to choose between stealth and avoiding combat to reduce the likelihood of getting swamped by the enemy, OR choose to take on a running gun battle – OR, if they're clever find the loophole, perhaps using the radio-jammer from early to prevent those pesky reinforcements ever getting the message...?

In a sense remaking syndicate gives Developers the chance to create not just one city but dozens of thriving cities, each with their centres of power, culture, sectors of society, factions, landmarks, identity, wealth and resources – with each aspect playing a part in both the player's goal of conquering the world and the game's goal of drawing the player further into the narrative, and though I doubt it'll get the remake it deserves the potential Syndicate has is self-evident, even now.
#Community    #PC
Login to vote this up!