Pretty Fly (For a Kaz Hirai)

8:38 PM on 06.02.2011 (server time)    0
Let me preface this by saying I DO NOT have "BIAS" against Sony. This parody song just came from a weird idea while working, and how Sony hasn't had the best image as of late. Kaz Hirai fit really well in the song title, and I just went from there. I'm also not making the lyrics rhyme as in the original song. It takes a bit too much of my time, which is currently devoted to sleeping, writing music, or playing games. So enjoy the super rough draft of this thing that is like a misheard lyrics but totally isn't. Maybe.

Play along to "Pretty Fly (for a White Guy)" by The Offspring, since that's where I got the idea, obviously. All credit to them for the real song and such. [especially since the original lyrics fit so well that I kept a good chunk of them]

"Pretty Fly (For a Kaz Hirai)"

You know it's kind of hard
To sell PSP Go's today.
Our image isn't cool,
But we fake it anyway.
We may not have a clue;
And we may not have style.
But everything we lack
Well we make up in firmware.

So don't debate, or PS Hate
You know we really do not get it anyway.
We're gonna play the field, and keep it real.
For you no way, for our 401k.
So if you don't pay, just send us your blame.
At least you can blog on your geocites page.
The world needs PS3.
So (Hey! Hey!) do that blu-ray thing.


We need some new games
Not just any will suffice.
But we don't have a space marine
So we brought Firmware Thrise.
Now cruising in our jetpacks, we see hackers as they pass.
But if they hack us twice
We'll sue GeoHotz's lily ass.

We gave Infamous, and LB Planet
We know you don't have those games anyway
We're gonna hype our brand, and keep it real.
For you no way, for our 401k.
So if you like us straight, to N4G navigate.
At least you'll know you can always love us anyway.
The world loves PS3
So (Hey! Hey!) do that brand new thing

Now we're getting a new firmware.
Yeah we're getting it done.
We want respect, but we sue anyone.
Blogs say we're trying too hard
And we're not quite hip.
But in our own mind
We're the dopest trip.

So cut us slack, and give us back
Our Other OS is ours to keep from you
We're gonna cut a deal, 599 a steal.
For our own wave, for our own waverunner.
So if you don't hate, shut up and play our games.
At least PSN gives you Wipeout HD Remake.
The world needs PS3.
Oh the world loves PS3.
So let's get some more PSP Go's.
Kevin! Butler! tweet this brand new thing.


Also, while it is kind of game related, I tagged it as such just so I wouldn't have the higher ups in the community raining divine Destructice (Destructoid + justice, and yes you can use it) on me.

Depending on how creative I feel, I'll try to tackle Microsoft and Nintendo, but we'll see.

Don't worry Sony. You'll be super cool someday. I'll still play on my PS3. Just get me PS2 backward compatibility and God Hand HD (so I can actually play it since my PS2 is busted). We'll call it even.

Thanks for reading everyone. 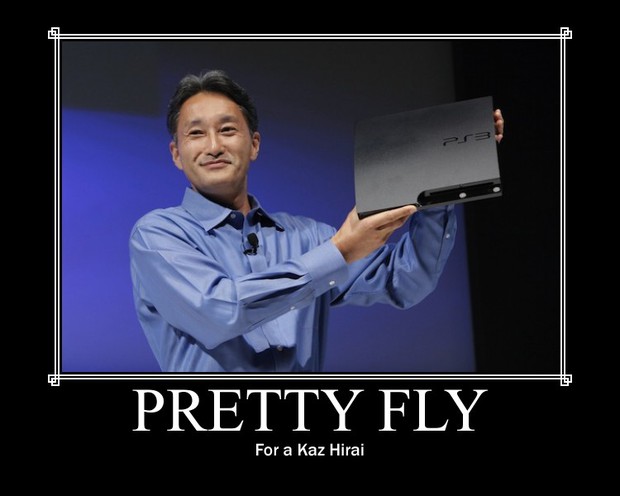