3:34 PM on 06.02.2011 (server time)    0
So I've never made an entry but I decided that with the work I put into my contest submission, it would be cool to put up some pictures of my doggie, Chloe, and the parts of her costume I made. The hardest part for me was pretty much the entire thing! Coaxing my dog to behave was tough, but it worked out! I had never done a stop motion video before, so I had to learn and i ended up with over 250 pictures with some I had to throw out because of quality issues.
Making the armor took the longest, I wanted to use cardboard but it was hard to use because its near impossible to shape so I ended up using a plastic folder i had for her legs. I just cut up the folder into large pieces and rolled em up and made sure her feet fit comfortably. On top of the folder pieces, I put blue construction paper and to decorate I used this shiny Crayola paper that is only used with specific markers. For her shield/back piece I first considered making it look like Link's Mirror Shield from The Wind Waker, but decided against it. Her front legs got a simple design, but I regret trying wings on the back legs. It didn't look how I wanted. :/
So anywho, I learned a few things doing this project. I wish I had a helper since it was a pain to have to get Chloe to not move, take pictures and still move pieces around to show animation. I even had to sow a bit, and I know for sure I didn't do good with that so I gotta figure out the technique in case I ever have to again.
So please, enjoy the video i made and leave any comments or tips!


And some pictures! The first one is Chloe hiding in her bed 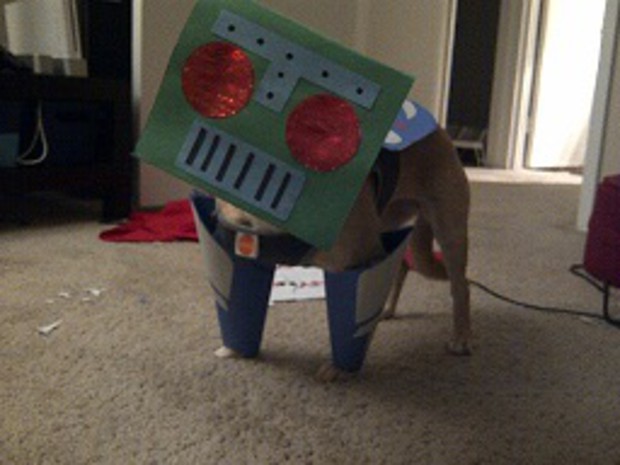 Name's Jose. I love games, dont have a 360, but thats alright! My Wii U,PS3, 3DS XL and PSP are more than enough. Not a big fan of shooters, but Resident Evil and Metal Gear Solid are still awesome. I like RPG's, Final Fantasy and Valkyrie Profile are at the top of my list. I'm a Pokemon Nerd and I have caught them all without hacking :D The Legend of Zelda is my favorite series.