4:53 PM on 05.31.2011 (server time)    0
Changes, as gamers we love them and hate them. The main gaming conference we all look forward to every year is no different when it comes down to being affected by change. I would love for E3 to see some changes. I would love for E3 to be open to the public again, and have the community be a bigger part of the event. I would love it if Kiss opened up E3 with "Lick it Up" amid blazing fires and midgets dueling with machetes. I would love to see E3 be different, change up the main press conferences from being these meme-filled high school power point presentations to more exciting and comfortable talks. The question is, are these changes necessary? Would changing something that is already well established help the conference at all? Perhaps some of these changes are appropriate while others should just be fleeting dreams and ideas.

Picture you sitting and waiting for Miyamoto to come on stage and discuss the latest Zelda game. You're eagerly awaiting the God of Nintendo to come on stage with that big grin of his and show off the new game, but the lights quickly shut off. Smoke fills the stage and lasers illuminate the walls. People begin to walk on stage from both sides and stand next to each other in an orderly and precise fashion. You hear music, its still an instrumental so you can't identify it, but you try to liken it to an old Nintendo theme. A circular platform rises from the middle of the stage, and you hear the voice of Lady Gaga.

This is something that is totally plausible at E3. What developer wouldn't want the support of ridiculously popular pop star being the voice of their company? An icon like Gaga or Kiss backing a company would increase sales towards the specified demographic, but would it be a smart move? Frankly, I think not. There really is no point in making E3 into this celebrity filled convention when gamers already have our own celebrities to look forward to like Miyamoto or Gabe Newall. This kind of entertainment would be annoying, and cause more of a distraction than help. In terms of stage performances, E3 would do well to stay on track with what it has already. 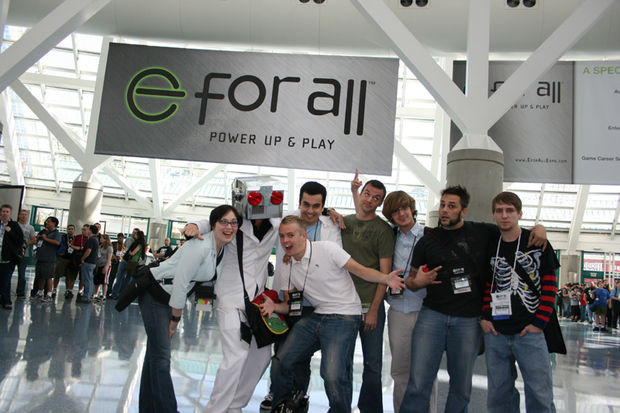 Finally I wish E3 could be different, change the set up once in a while. The presentations for the games are about as exciting as watching a high school play. For the most part the only reason most people I know watch the conferences is to hear about the announcements of the various games, consoles, and accessories not Sony's 10 year plan or Microsoft's new marketing campaign to bring in kids. Sure these things are informative and interesting; perhaps make that portion a separate conference or get someone with more enthusiasm (other than Reggie and Kaz) to speak and give the conference a more genuine feel. I'm not familiar with the showroom floor, but if it�s the same layout every year why not change it? I think the reasons these portions of the show stay the same is due to familiarity and economic reasons. Keeping the layout the same takes less focus away from a trivial problem and gives the planners time to figure out other important details of the show. Economically the companies need to show off their marketing strategies and plans for the future to a wide audience (since millions are watching at home as well) rather than present those in a separate conference few outside of the event will see.


All in all I think the people that run E3 know what they're doing. There are many changes worth exploring, but it is probably best for the event if it is left untouched. The one change that I think really needs to be explored is allowing the public to visit again. E3 failed by taking away the ability for the fans and consumers to visit the event given that they help fuel and influence the industry. Hopefully everyone's expectations for this year's event are met and see you on the other side!
#Community    #OpinionEditorial
Login to vote this up!