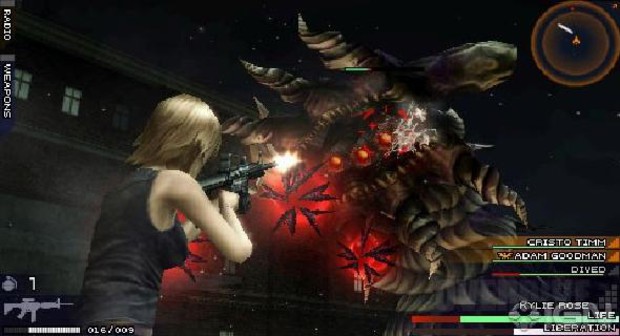 The �RPG� part of action RPG is sorely lacking. As you fight enemies you gain the usual experience and you can upgrade weapons to improve your survival skills such as increasing accuracy or ammo capacity. I barely noticed any significant effect in the upgrades I applied throughout the game, but for those of you here for Aya�s exploitation you can change her aesthetic appearance. There�s a rather transparent look at the intended exploitation of Aya when you notice that there�s a maid outfit. If there�s anything more appropriate than tight jeans for facing legions of fantastical terrors, it�s a maid uniform.

An astute reader may have realized by now that the constant battles of attrition in 3rd Birthday make the game mercilessly padded, which is why I was so surprised that the game took so little time. I cleared the entire story in about five and a half hours, and if my earlier criticisms of the story didn�t tip you off rather than a climactic finale you�re left with a pretentiously ambiguous ending. After enough deaths that reminded of my first time playing Demon�s Souls it wasn�t a satisfactory payoff by any means.

Depsite a few interesting gameplay ideas 3rd Birthday feels like an altogether different franchise rather than a spiritual successor to Parasite Eve. It doesn�t really hold up as either an action game or an RPG, and reducing Aya to a submissive sex object is something I don�t imagine sat well with fans of the series. The resulting game lacks appeal for Parasite Eve fans but really can�t bring anything to the table for a new audience.
#Community    #reviews
Login to vote this up!