2:28 PM on 05.26.2011 (server time)    0
For new readers: I used to do a lot of "Pew Reviews" on the cblogs, and after becoming an editor it became a bit silly to post reviews on the cblogs instead of the front page. Hence why you haven't seen one in quite a while. I meant to post this earlier, but spreeing The Witcher 2 and L.A. Noire kind of destroyed my activity in the last week or so. This is not meant as an alternative review of any kind, but more as a more elaborate and different point of view on the game, as well as a place to discuss some of the game's elements in a place that is not flooded by "OMG y u no can play PC games!?" comments.

So The Witcher 2 then, a game I had such high hopes for. All the elements of a possible GOTY are in the first few hours: hard to master combat, hints of a huge and epic storyline, non-linear narrative, a different take on the western RPG genre and some great graphics and sound. Yet while I still enjoyed it enough to finish the game within two full days, it left me a bit stupified about some of the game's design choices.

Last week, I had quite a few chats with Jim about the game, discussing the things that irked us or just annoyed us (as well as things we liked). And while different things can annoy people in different amounts, we saw eye to eye on pretty much all the negatives that are there. Whether or not the good parts make you forget about the bad parts depends from person to person too; but it doesn't mean there are only good parts. 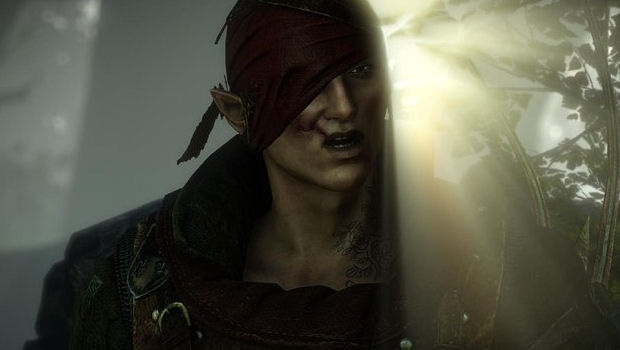 If anything, The Witcher 2 would've benefitted from some user research and testing with actual players. Sure, PC gamers can be expected to be a bit more hardcore when it comes to figuring out things for themselves, but the balance of difficulty and difficulty progression just feels off to me. All the skills you need to survive at first just end up being a bit useless once you get the "Quen-attack-dodge away-recast Quen" routine under control. And while that's just one method, I doubt running around casting Igni (fire) and waiting for Vigor regeneration is much more fun. When it comes down to it, you approach a fight in terms of how much DPS you can deliver to reduce enemy HP in the most efficient way as possible, without dying yourself.

Regardless of all the issues that distracted me while playing it, I brushed off most of them and got over it. Some of you may do the same, and enjoy the game a lot. Some of you may die a few times too often early on, start playing L.A. Noire or one of the bazillion June games instead and forget where you were when you go "Oh yeah I still have to finished Witcher 2!"

In the end, I'll remember The Witcher 2 as a pretty good and fun RPG that had a lot of potential it didn't quite live up to, and left me unsatisfied. I still liked it better than Dragon Age II on the whole, even though they are really two completely different games. The latter game had better polished gameplay throughout the game while The Witcher 2 blows its mythology, politics, and fantasy world away. But they are still different beasts, and just because they are both Western RPGs doesn't mean they are that comparable. The only similarity is that both games end with openings to major events in the world, which you won't actually be a part of for at least 2 years.

Despite all the bitching about what is wrong with it, I think it's still worth checking out the game because it's beautiful and a blast to play when everything works falls into place and feels great. Which is about half the time you play it. And when it doesn't, I expect you to be able to get over it. That doesn't mean it's a perfect game, or even a 90s rated game on Metacritic if you ask me; too many issues detract from the overal experience for that. Don't think people complain about the game because they suck a it, we complain because we care about it.

But it's still a remarkable achievement that could've been a lot better, and a game that can be hard to put your finger on if you want to describe just what it is that feels "off" about it. But you have to take what is there and not what could have been. And it's one game I'll probably replay from a late Chapter 1 savegame at some point, but not any time soon.

If you really need a score to judge a game, then suffice to say I'd rate The Witcher 2 0.5 points higher than Dragon Age II. And while I criticize that game often, I didn't hate it. OMG points! Basically, this is how I feel about it: 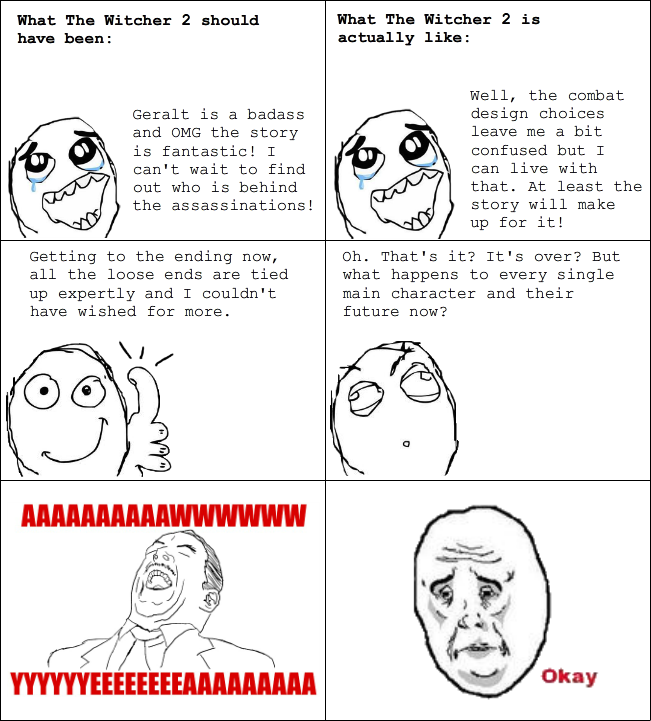 Join IRC! Don't know how? Click here or on the banner above!

Hai! You may know me as Professor Pew in older times. If you see a cblog here from beyond September 2010 or something: that's from the cblogging days and not anything editor-related :)