Can game mechanics spoil us? 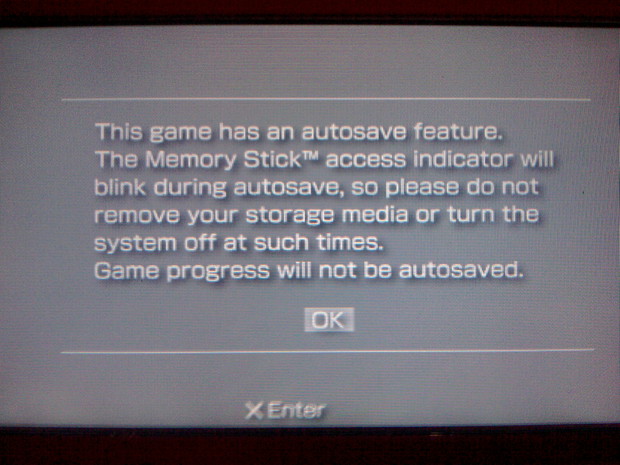 "Game progress will not be autosaved."

History buffs among us may link this reference to the fact that Cecil and Kain's adventure originally came out in 1991. This was a time where autosave and checkpoints were very far off - given the carts usually relied on battery saves, this would then need a point where the game didn't have to load as much information - thus preventing saves during big boss battles.

This design necessity brought with it a neat structural tie-up, making progressing through levels much more dependent on clever resource management and healing. Many games keep this save structure to this day - it is a regular sight in the Final Fantasy series, and a slight variant of this is a key foundation of Demon's Souls' notorious difficulty.

Would the series have turned out very differently if you'd been given autosaves part way through battles? Without a doubt. Who would be truly satisfied by defeating Tiamat, Golbez or Ruby Weapon in a game autosaving every few thousand health points, allowing you to reload when you don't key up a move in time? Very few.

How many game mechanics and standards do we now 'take with us' and expect in the leading lights of a genre? And indeed, what would have become of our leading lights if they swapped certain mechanics?

Would anyone touch GTA if a violent death required a reload to an earlier save rather than waking up in a hospital with some money gone?

Imagine a 'Gears' or an 'Uncharted' where, rather than charging from cover to cover recharging health behind walls - you are required to bandage wounds and self-medicate as in Metal Gear Solid 3. Goodbye run and gun.... it makes me wonder.

On the other side of the scale, what about the terrible games with the occasional good mechanic?

The most recent Alone in the Dark game offered a 'chapter select' - while I think this is not entirely necessary in a game you're playing 'first time round' it is a promising idea. I often wonder why when millions of �/$ are spent on making hi-definition, luxury moments and experiences that the only option is to replay it from the very start - surely one of the ways to ensure we keep games and don't trade them in is to allow easy access to favourite parts?

And what about the games of the future? Are we doomed to lose our consoles to self-playing modes and automatic boss fights that Mario and Final Fantasy XIII hint at? Who can tell... but if we do, at least the publishers will be able to sell us all the 4D remakes of this year's releases.
#Community    #Retro
Login to vote this up!

I began with Final Fantasy IV, Day of the Tentacle and A Link to the Past, then never looked back. At least until I started buying the remakes.

Now stuck in a storage cupboard somewhere between Kirkwall, the Ishimura and the Normandy.