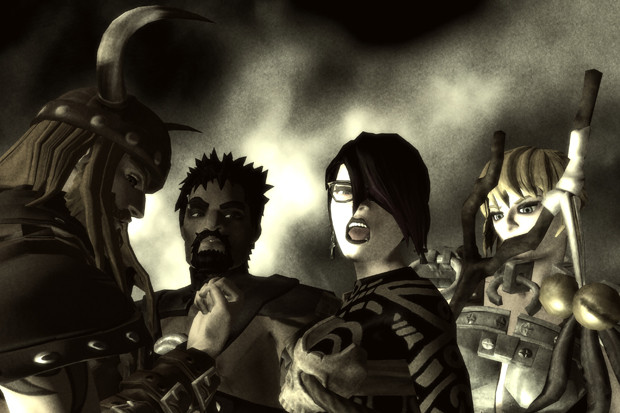 My brother's fantasy themed side band, Gravity Blessing. Big props to anyone who gets that reference!

Rock Band is casual gaming done right. Its perfect. There is something in it to appeal to everyone, from the stadium butt-rock favourites of Lynard Skynard that everyone can sing along with to the weird synth-filled beats of Poni Hoax's Antibodies for oddballs like me. Even in a diverse group filled with large age gaps and different tastes it is easy to find tracks that everyone can enjoy. Its this broad appeal that makes the game attractive and intriguing, but its the way the game plays that really makes it work.

It can be tough to get non-gamers to play anything, especially when mixed in with hardcore players with intimidating skills, but this is not a problem for Rock Band. Rock Band has mechanics that are easy to understand but not condescending. Hold the button and strum the bar, hit the matching coloured pad with your drum stick, hold mic to face and open your mouth. Its all natural and intuitive even for people who never once touched a gamepad. At the same time though, its deliberate and satisfying. No random mashing or flailing like so many party games, Rock Band manages to be accessible while still making demands on the player's skill and focus. It is so easy to jump into Rock Band and start having a good time, its the perfect goodwill ambassador from the scary world of vidya games to the straights. Its a converter, an eye opener. Not every game is about ninja-dudes punching each other in the face or space mercenaries slaughtering insectoid armies, some are just about having a great time. I know several people who went from “what is this plastic guitar?” to “I'm gonna buy one of these!” in the span of one awesome evening of Rock.

I've been reading that Jane McGonigal's book everyone is reading, "Reality is Broken". In it she discusses some of the most compelling elements of game design and I couldn't help but think of how expertly Rock Band invokes them. One of the most important elements she identifies for a compelling game is the idea of players subjecting themselves to voluntary obstacles. That if a game is good and taps into a positive feedback loop, players are naturally predisposed to advance further and further in the game, like striving for a higher and higher score in Tetris or advancing a character in WoW. Rock Band really nailed this.

While Rock Band is super accessible to fiddle around with in a casual way on its easiest settings, if you get into the game and start playing it a little more seriously (and perhaps with a lower blood alcohol level) there is a smooth progression ramp and feedback loop for advancement. Increasing the difficulty adds more buttons to keep track of and charts the notes in a more demanding fashion. In return for this added challenge, you have the chance at a larger score and earning cash and clothes to pimp out your virtual rock star. The harder you rock, the more bad-ass your band looks. Its smooth, its satisfying. People get a taste of it at a party, play around a little bit and notice how much better they get in one evening. They can see how crazy the charts get on expert and think, “could I ever play like that?” and next thing you know your so-called casual player becomes a hard-core rocker, constantly working up the ladder and striving for that next level of difficulty.

It pulls people in, then gets it hooks in and keeps them there. Suddenly all these non-gamers see what all the fuss has been about, just why gamers make their past time such an important part of their life. And a new player presses start. It is a beautiful thing to see.

As we go into another May Two-Four I reflect fondly on those memories. We might not be rocking the block this year, but the legend will never die. I will never forget looking at my band-mates, streaked with lighting, half shadowed in the fog, the crowd hollering out requests, and thinking “we finally made it” even if it was just for a moment.
#Community    #OpinionEditorial
Login to vote this up!