It all started with the above infamous video, where a guy was reduced to pure panic over Amnesia as his friends were doubled over in laughter through voice chat. It was then that I decided to get the game, and came up with my cunning plan: I would set it up like a horror movie series, but combine it with the experience I got from the video. (Throw in some "role-playing" for believable reactions)

In its first run, most of my roommates and I watched "The Walking Dead" and were enthralled. The atmosphere was palpable at times and I wanted to do the same thing with a game. I then voiced my idea of doing something like this with Amnesia. At first I was met with quizzical looks, since they didn't like the idea of crouching over my shoulders. Bu I fed my baby birds some sweet goodness. I would hook up my laptop to our living room TV via HDMI and play from the computer. We could turn off all the lights, blast the sound, and enjoy some sweet horror gaming. If they could lift me above their heads and parade me around, I think it would have happened.

So the first night, I set up everything. I planned to play the game as if I was the character, reactions and all. I kept my movements very believable, looking in all the crevices of the world to just explore and get everyone immersed in the game's narrative. To put it another way, I played as if I was RP'ing (which I had never done before, but when I get involved with great games, I do it passively and get even more engrossed). So that was the setup. What followed was one of the oddest, but best gaming experiences that I've had. 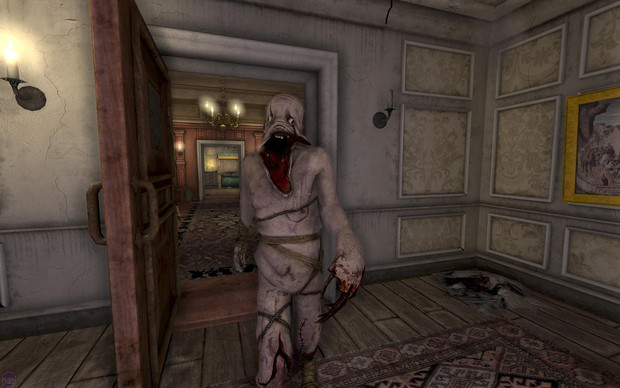 "Poor guy, must have seen Courtney Love come out of the shower...

As I started to encounter the monsters, there were indeed some startles and screams. I think the most panicked moments were the "water demon" parts, since you couldn't see it. I had a case of tinnitus I think for a day or two after that. But what really struck me as odd was that I was getting help from my roommates that were versed in games like this, especially since they were supposed to be a passive audience. We've all probably had something similar. I'm sure the following phrases will be familiar, in a game's context:

Having 3 knowledgeable brains helped make the experience better. But it was always an ego boost to figure something out while as the character. Until I got about halfway through, where the game became too involved for them to do anything other than grip their sheets tighter or crack jokes to avoid being scared, I was thinking as if I had a collective super mind.

That was another thing, the joking. I think in any "high stress" game, whether it is because of scares, tricky spy missions, or an incredibly close multiplayer game, we all need another person or source of attention to give our mind a break. I play a lot of online shooters with music on, but I'll invite friends to watch so I have someone to relax a bit. It's a great cathartic experience that doesn't involve raging (and if so, it's comedic) or becoming a piss-ant. For Amnesia, one section with patrolling monsters became an episode of Mystery Science Theater 3000.

"Oh man, he's late for his plastic surgeon appointment."
"I bet that guy could totally reach his dick with his mouth AND cut it at the same time"
"This British guy can fuck right off"

By the end of the game, Amnesia had gone from being a survival horror to an exercise in atmosphere and great comedic timing practice. I wish I had better examples, but my mind isn't pulling any gems out of its ass. But a game, so glorified for its intense mood and scary moments, had become a comedy movie with some scary moments. I think if I had played the game how I was supposed to first, I would have had scarier moments. That's not to say I didn't create some, such as when I went on a Benny Hill-type chase scene, only to be clotheslined in the face by two monsters. With nail/knife hands.

That's just one moment I can think of where my experience with a game has been completely changed. I'm interested to see what other people do, and hopefully can be a part of some online meta games, like doing a "survival" run of the Carmageddon Mod for GTAIV. What about you? Get on your C-Blogs and start posting away!
#Community    #OpinionEditorial
Login to vote this up!