I'm Kind of a Big Deal

3:28 AM on 05.19.2011 (server time)    0
This will probably be last blog until I get back from my uncle�s wedding next Friday. That means that there will probably be no interviews posted for about a week.

So I finally finished a lot of games to finally go into length about them. 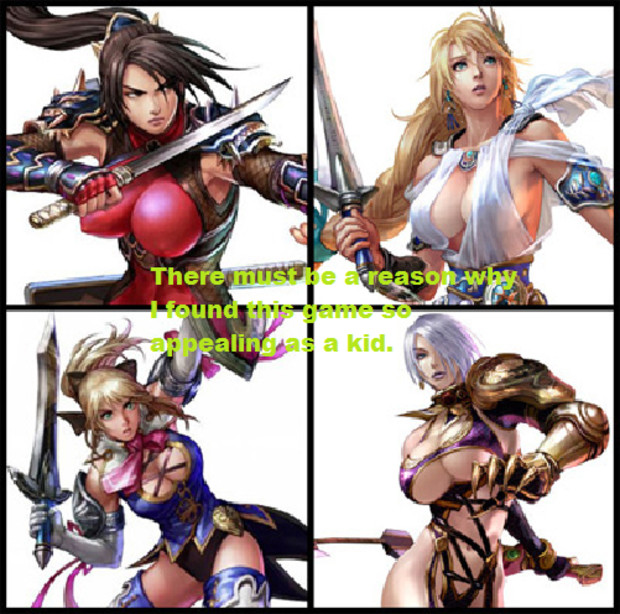 Now I didn�t actually beat this game �per se�, but I finally played it at a friend�s house. I haven�t played one of these games since the second one came out. Now this game, or should I say the series, holds a very special place in my heart as it was the game my best friend and I bonded over. Has the series changed much? Aside from the breast size, none that I can remember. If you want a good 3D fighter, I�d happily recommend you Soul Calibur.

How Bright does the Soul Burn?

Uh�tsk�.Let�s see�.I�m watching a movie called L.A. Noire. I haven�t finished it yet, but so far it looks pretty good. The only problem is that the main character is an awful driver. Everything else is To Be Determined.

I have a problem with blogging. I blog so much that it may not be noticeable, but it�s true. The problem I have with blogging is that whenever I blog, it is very �me-centric� which may be the point of a blog in the first place. The thing is, I was raised in a very traditional Asian household. What that means is that I was told that speaking about oneself is very poor taste. Now, growing up in America has all but eliminated most of those beliefs but it was such a prominent part of my childhood that it more or less became just an involuntary reaction. Now this is just culture shock I�m sure, but the reason why I resort to self deprecating humor is to actually offset the imbalance of the �me� as an emphasis.

The last thing I want to give you is the impression that I am some super uptight, recently off the boat Asian immigrant. I�m not. I grew up here, lived here, and was taught here for most of my life. I am for all intents and purposes, American. That is my identity and the nationality I identify myself with and nothing anyone can say will make me feel differently.

Which is why I want to say that the title of today's blog is derived off today�s rambling of arrogance and blogging rather than my assertion that I am some sort of big deal.

Now the reason why I bring up this small existential identity crisis is this certain feeling of�well of culture shock. A recent conversation with VenusinFurs in which he asked why, because he was topsauced and that his name was known, couldn�t he post a blog of little to no relevant content, possibly asserting that he could get away with it.

I am of course using this as an example to further my point rather than belittle the status of another, but my question is: Could you get away with it? I mean, if someone like Capt. Bus or AwesomeExMachina or Stevil went ahead and posted a blog of gibberish with the mentality of �I want to so I can� be considered correct in their way of thought? Could they get away with it simply for being amazing people that contribute regularly to the site? Is it a right or arrogance?

At this point, I don�t really care anymore. After all, this is just another one of my blogs and another thought.
#Community
Login to vote this up!