I know these usually go up around the afternoon time (my time), today I have to post this up bright and early because...I will be gone allllll day.

Oh also, I changed the name of the URL's again here. If the words don't sound like they belong to Nihil, it's probably because they aren't.

� What made you start blogging and why Destructoid?

July 2010. Destructoid Forums.
It was a normal day... Newbies were being christened by the Rape Squad. Scoot Polgram was all the rage. There were reports of complaints coming from the front page about viruses or some such, but no cause for concern... Then the double-posts started. Well no big whoop - a few double-posts here and there from people with shitty internets never hurt anyone. I wasn't double-posting, so it wasn't even a minor annoyance for me... Then the Google warnings started up. Which were a major annoyance.

And then the unthinkable happened. What? Gyrael became relevant? Haha- no, my friend. Our Forums disappeared! ANARCHY ensued...

Okay, so none of that happened. But it was a very WTF time for most of us (unless you had skype). I was among the first to stagger out of the basement to perceive what laid before me: The land of community blogs, front page articles, and reply boxes w/o any fancy buttons. I was taken aback, though with the Forums gone for a week by then and no word on when they would return, I had no choice but to assimilate... I was not adverse to writing paragraphs full of words that formed coherent sentences, so I used that to my advantage and wrote a shitty introduction in my second ever blog post on here, simultaneously hinting to the blogging community of their impending doom with the Forum Dwellers having nowhere to go but here...

Hours went by. Days went by. Still no Forums. I began to break down. So I wrote a couple asinine blogs that, to my honest surprise, got positive responses and *gasp* sparked a semblance of debate in the comment thread. So I wrote a few less asinine blogs that were warmly received as well. And by the time anything resembling Forums were put back up, I was too invested to just quit.

I've blogged and written reviews on gaming and movie websites, years before coming to Destructoid, so that I could vent my geek tendencies when I wasn't dealing with life and/or hanging around less geekish people. I would say that it was that experience that's given my writing whatever hook it has that makes people say I'm awesome and keep reading, but I've been writing since forever and I'm hardly ever criticized for my (unprofessional) work. So there's that.

As far as WHY on Destructoid... Well, I'd pull a Zack Mayo on ya but I'm too grizzled for that shizzle.

� Where did you get your username and avatar?

I had gone through a couple handles in 2009 that I was content with but didn't feel any real attachment to. By the fall, I settled on "Nihil" because it's simple and I like Latin roots, and I couldn't think of anything more clever. However, I miscalculated the amount of people who have heard the word aloud, so I truncate it to "Nils" on occasion to avoid that initial awkwardness. For when both names are already taken, I just put a "wtf" in front of it, 'cause what the fuck else would I use? This may well be the last alias I ever go by, since at this point I don't really care to think of going by anything other than my name.

I became fascinated with Banksy artwork last year and just started using his rat stencils for my forum avatar; changing it to a random one every week. After a couple months of doing that, I came across the original Grin Reaper picture and was blown away by the awesome. 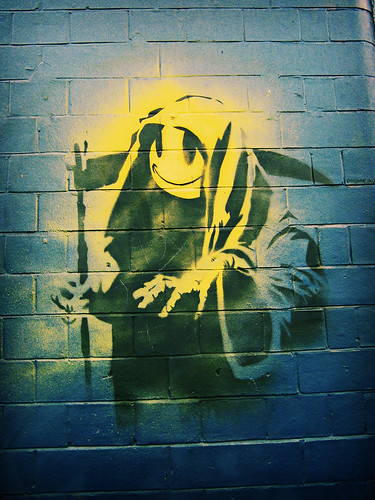 It immediately resonated with me, conceptually and aesthetically. The stark coloring and lighting in the photo. This round, unassuming smiley face on a decrepit reaper body. I was just like "This is it. If this doesn't just say everything about my outlook on life, nothing else that I see with my eyeballs ever will." I thought the clock-sitter version, which I was equally enamored with, would make a more visually interesting avatar, so I use it for my c-blog account.

There is a scene in Way of the Samurai where you are tied down to train tracks, damsel-in-distress style. One of your options is to rudely forgo help and allow yourself to be ran over by the oncoming doom-train.

A less morbid moment would be that time I fought the shogun atop a 30ft water tower at sunset, on hard difficulty. Pretty damn epic.

� If you could hug anyone on Dtoid who would it be?

Everyone with breasts... except Jim. Well, maybe Jim.

Screw it, Jim too.

Hammershark, unless I get an apology.

� What are some of your favorite, non depressing, past times?

Do you mean hobbies or memories?

For hobbies, I guess gaming would be the most obvious, but also Sudoku, Poker, taking walks/jogging late at night, and web surfing. I used to watch film and television a lot. Not so much now, which depresses me.

As for memories, I guess random one's will do... Um... Drinking/eating coffee and cookies at my first office job every other day was pretty awesome... Being on a Comedy Sportz team in high school/my first open mic last year... My Japanophile-cinema phase... Cooking scrambled eggs... Listening to Earthtone9 all day, erryday, before they broke up... Kissing my girl's tummy and falling asleep on it... Learning how to shoot and edit video film like a boss... Going head-to-head with a friend in Soul Calibur for at least 12 hours straight... Reading a lot of comics/manga in bookstores on my way home from class, without paying for them... Collecting zippos and replica ninja swords... Vomiting whiskey and vodka...

Maybe not so much that last one. Kinda.

ಠ_ಠ
Other than that guy; haven't really thought that far ahead.

buy my own heroin

� What are some great memories you�ve had of the forums?

The Mk debacle was very interesting; seeing forum social politics in full effect. That dude got it in the ass so hard. Shit got real.

Getting my custom title, and more recently having it tastefully illustrated by the irreplaceable ZombiePlatypus (as seen in my bio).

The SeptemBEARD and Secret Santa threads.

A bunch of other threads.

Having time to goof off in the forums all day.

� How�s that beard working out for you?

Pop some hydrocodone with a couple shots of jack, and watch Harvey Birdman Attorney At Law till I passed out.

Then give you a dead arm the next day for lying to me, if I remember.

On a serious note: I have no idea. Probably go about my day as normal, and hope my death isn't as embarrassing as getting hit in the head with a toilet seat.

� Whose your favorite heroine? (Female)

I have the most affinity for American McGee's Alice, mainly for nostalgic reasons at this point. Then again, I can't think of another hero quite the same as her, male or female, but I attribute that to the setting she inhabits more so than her personality. She's dark, caustic, and practically fearless without being masculine or overtly physical - a product of her trauma and the chaos of Twisted Wonderland. Though, she suffers from the same "sexuality deficiency" that Jade does.

There are no indicative characteristics that define her as female in the world she inhabits, which makes her swappable with British schoolboy. Not that it's a bad thing, just something I've noticed; which again I'm sure was a conscious decision on the part of the creators. The merit of accessibility allows gamers of both genders to enjoy her amazingly written story, without any ridiculous controversy. In fact, she's kind of perfect in that way. Despite having lost her mind to a violent nightmare, there's still a certain innocence retained by making her neutral in that regard. And that also fits her story/personality, really.

� You�re crazy, I�m crazy, the person reading this is probably crazy. Who is the craziest motherfucker you�ve ever seen?

The craziest fuckers I've ever known are people who go out of their way to help out fuck-ups like me.

It was the dead of winter at night (granted, there's no snow in SoCal, but still), and I was wandering the city half-drunk in just a t-shirt. Shit was cold. There was this middle-aged mexican dude in front of what I assume was a homeless shelter that stopped me. Didn't speak a lick of english, but I was able to communicate in what broken spanish I remember from high school, and he was adamant that I go inside the little house with him. So I followed him, half-expecting to get knocked out and chained up next to a couple corpses. But whatever, I didn't have anything else to do.

He gave me a blanket and some snacks to eat. He asked where I was going, and I told him I was heading home to get my jacket. Then he asked if I had bus fare; I didn't. I left everything of value because I had no idea if I was even going to make it back. So he fuckin takes me to the nearest bus stop and asks a younger dude in spanish to give me enough for the next ride. It was a good 5-10 miles back to my house, so I definitely appreciated it. Unfortunately, my dumb ass was still too drunk to tell which part of the city I was in, so I got off the bus a good 2-3 miles early. And I still didn't have a jacket. And when I got home, I had to use the grill spatula to jimmy my window open 'cause I left my keys inside.

In retrospect, I'm sure my looking pitiful and jacketless made me less intimidating, but I always find it peculiar when individuals are just... I dunno, crazy enough to offer assistance to shady-lookin' motherfuckers. I like to think they're just living in a different world than I am, because I sure as hell wouldn't help me.

Patience. That, or my new laptop.

The most fucked-up prank you ever pulled on someone?