I've decided to spread out my posts for this series a bit more, since I'm beginning to run out of suggestions before I get a chance to play more indie games. I definitely don't plan on ending the series just yet, since there are still plenty of excellent games out there and surely there are more to come in the future. I just won't be posting every weekend like I initially planned. In somewhat unrelated news, I finally finished Portal 2 so I've had some more time to play indie games. However, I just bought Demon's Souls the other day, so that game will probably end up consuming a lot of my gaming time in the next few weeks, haha. 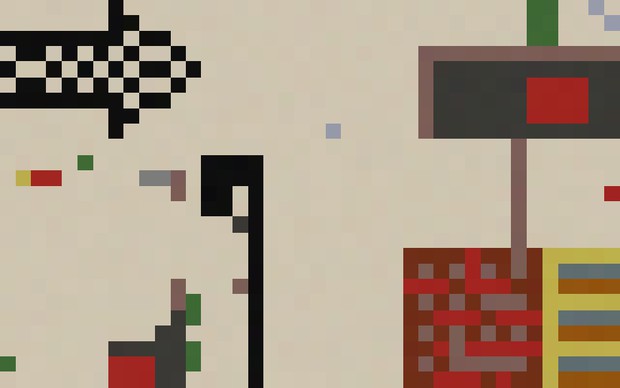 Tottenham is a game that's all about simplicity, and in this case I think it really works. It's a puzzle game where you play as a demolitions expert in charge of clearing a path from one subway station to the next, so that a subway line can be built between them. You can throw explosives towards the debris to clear it away, but be warned: the resulting shrapnel caused by the explosions can kill you! There are several strategies that you can use to avoid flying shrapnel, such as trying to dodge it or running and hiding behind something. Later levels also contain pests than can kill you which must be exterminated before the subway lines can be built. It's a relatively short game with a final boss battle, and your progress is saved once you complete a level. The graphics are extremely simplistic, consisting primarily of colored squares, and were apparently influenced by some mosaic art at the Tottenham Court Road station in London. The theme song played during the game is also really excellent and catchy. Don't be turned away by the simple graphics; Tottenham is a fun and challenging little puzzle game.

That's all for this week. I'll see you guys next time for some more awesome free games!
#Community    #Indie
Login to vote this up!