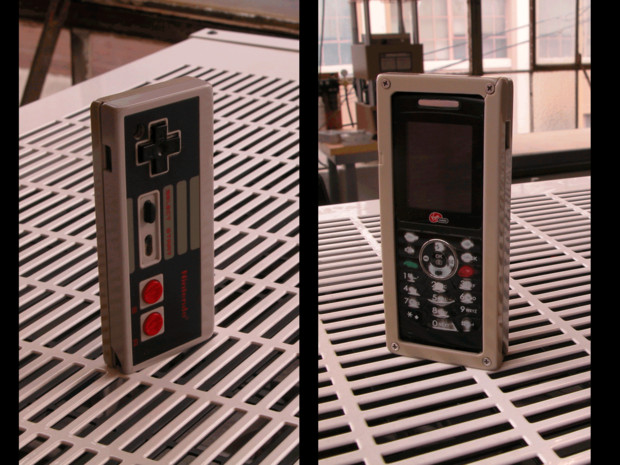 I should've taken a picture of this years ago. This is actually the second one I've made. The first one fell out of my pocket as I rode my bike to work. I went looking for it. I found it had been crushed by an automobile.

This phone is a little bigger then the last one. The first thing I did was take it apart and remove the electronics and rubber parts. I then milled out the back to the old screw holes and added new holes. That was the easy part. The plastic parts where then epoxied down and all the odd bits and epoxy where milled flat. Two pieces of wood were glued down, machined and pre-drilled for the screws. The two center rubber buttons were cut down and a piece of wire was pushed though then. That's how I managed to glue them down. A small hole was milled out where the camera hole is. The phone was inserted and the camera turned on to see how far off I was. A slightly larger hole was milled. One more check, then the final hole milled out. Lastly, a hole for the power port, some filing, and Done. As you can see, I need to make a new one. One of the rubber buttons has torn off, a chunk is missing, a crack at a corner, and the epoxy on both red buttons has failed. Also, the case has yellowed quite a bit. If I get a slightly less stupid phone, I won't be able to air control.

http://blackheartindustries.com/
#Community    #Retro
Login to vote this up!