Why TF2 has endured for so long in the PC era. 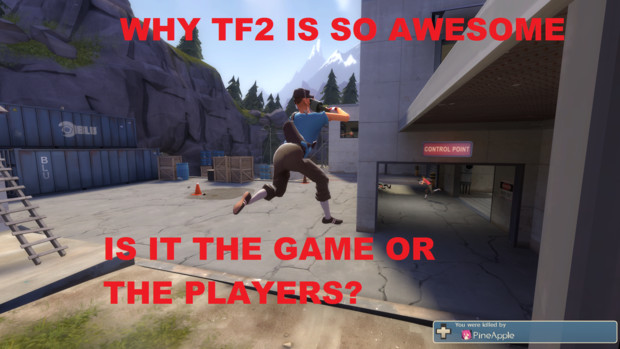 So many of you have heard about TF2 right?

It's hard to mention PC gaming and not have someone who doesn't know what TF2 is... but on the off chance that you may not know...

TF2 is a Cel-Shaded FPS that blends traditional FPS tropes with a zany and varied methods of combat. Almost every weapon is unique in some way with very few weapons sharing a similar firing structure. You have rockets, bottle grenades, bottles, axes, swords, bows, shotguns, flame throwers, mines, knives, revolvers, mini-guns, sandwiches, fish and syringe guns with which to defend you and your team. Most classes are locked into a few weapons which usually complement the class and movement abilities of your chosen class.
It's a fun game, go try it out.


The reason TF2 was so popular early on can be attributed to a whole bevy of reasons and singling out just one of them would provide an incomplete picture on what makes TF2 such lasting game. With that said... I do have a limited amount of time to which I can dedicate to this blog, so I will go ahead and explain what I can , the best I can.

1. It is fairly simple to start out
Back in the earlier days of TF2, classes only had one set of items to choose from. Their default set. Each individual class had a clearly defined role which contributed to the teams ability to go for an objective. The Demoman covered demolitions. The Scout had guerrilla warfare. The Soldier had high fire power with limited mobility. The Heavy Weapons Guy had strong area denial and defensive capabilities as well as an offensive option with the right support. The Engineer has stronger area of denial, but was originally fixed to the position he started in. Pyro, Spy and Sniper existed to cause chaos amongst the enemy ranks by taking out high value targets or harassing enemy flanks. Medic provides the strongest abilities in the game by healing and providing support to the whole team.

These roles facilitated the learning process, since you learn to use your weapons for the given task at hand. Once you figure out what class fits you best... it's only a matter of playing and playing until you master your class.


2. It's customizable
TF2 has got more customization than a taco bar on a Tuesday(This means "a lot", folks). Most every facet of the gaming experience can be altered to fit the current game mode. There are competitive mods that remove some randomness to the game. There are mods that add more randomly generated actions into the game. There are mods to change the entire game mode to something completely different. We have mods to make competitive gaming easier!

...and this was before hats/cosmetic items ever made their way in there.

3. It grows with it's community
Valve does something that every developer should aspire to do. That is to create a game experience that has the tools and options to last for years of active gameplay. While some developers are content with releasing their game and patching a few bugs or two, Valve ensures that the final product is not only polished.... but continues to grow and change with it's community. There have been so many updates for TF2. Some of them have been to fix glitches, other were to rebalance certain classes. Some brought completely new game modes to the table! The TF2 community loves the attention that TF2 receives, because it always results in an improvement to some aspect of the product.
Keep in mind that this is a game that retailed for $19.99 when it came out. For 19.99 you got 3 years worth of updates for free.

No other game gonna do that brutha.


4. It has a great community
It really does. There might be a few hiccups and bumps here and there but in the end we have an inclusive and supportive community on our hands to coach even the newest newbie.

Here are a few notable videos found strewn across Youtube:

Community being Awesome:
(Anything from Tutorial Vids to funny gameplay can go here)

Many more replays can be found in this link:


If you have a video which you feel is notable, just message me and I can add it on a later date (Assuming I can edit this post)

-Trygle
#Community    #PC
Login to vote this up!

I've been gaming since I could hold a controller.