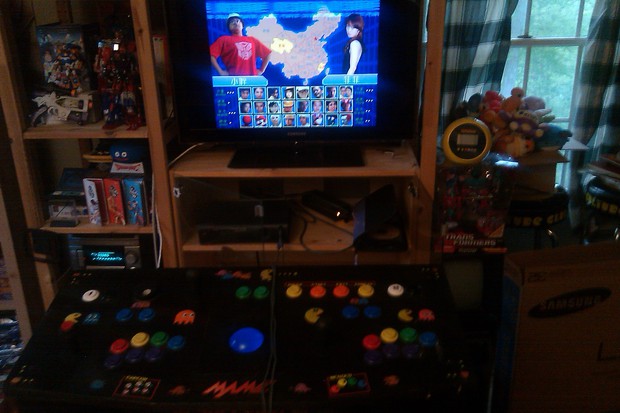 Feast your eyes on only a small portion of what you'll be missing if you don't attend this season's Baltimore/DC NARP event. Behold the sight of Dong Dong Never Die running with arcade controls. We understand, you may be busy attending your great aunt's garage sale, or you may live some place far away like Indonesia. But our estimates* have predicted that approximately five thousand visitors from China alone will be flocking to Maryland just for this event. And three of them may actually be women!

As if anything else could compare to the pinnacle of gaming that is Dong Dong Never Die, there will be many other opportunities to get your game on, including but not limited to, an Xbox 360 and PS3 on a big screen in the Modern Living room, a Dreamcast and Saturn in the Sega Love bedroom, arcade madness in the MAME room, Wii and GameCube set up in the Nintendo Loyalty basement (plus a pool table), a PS2 in the "Changston makes awesome meals" kitchen, and an Atari 7800 on the other side of the "Please cook on me Changston" stove. If that's not enough, hell, bring your own stuff, the more the merrier.

May 13th through the 15th: be here. If you live in the area and you're not on the dtoidbaltimoredc google group, first of all, shame on you. Second of all, get the hell on it so you're up to date on this, and many more activities that take place throughout the year.

* Estimates are not intended to be factual statements. What, you thought senators were the only people who lied?
#Community
Login to vote this up!