The video above shows my friends and I (the initial and final camera holder) being very loud and ridiculous at Dunkin Donuts after closing. You might be asking yourself, �Hoho, why are all your friends black? Why do you say �dawg� so many times? Identity crisis much?� None of that is important though, what is important is our behavior. This write up will be about how my particular group plays Smash Bros.

To begin, I met these guys in 07 after merely knowing of them through owning hacked Playstation 2s and owning pirated versions of Narutimate. Once we actually got to know each other, we became really good friends, we just clicked. One thing we all shared in common was our love for Smash Bros.

Since the first iteration, I�ve always played Smash Bros. with others and formed either new friendships (at tourneys or parties) or solidified old ones. That�s what I love about it most. There�s this sort of recognition of another�s skill and respect is formed based on their style of play and if they have good sportsmanship, it�s hard to describe. I know it sounds crazy, but being a competitive guy (at least with fighting games) it�s a big deal. 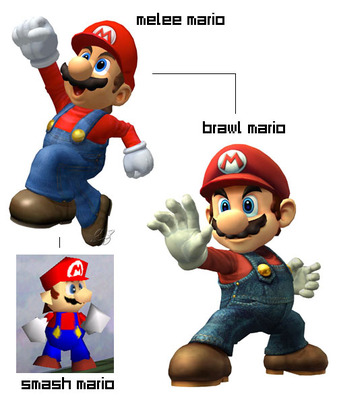 A big chunk of this ridiculous gaming came when we played Smash Bros. Melee, it was still the game to play back then before the Wii came out and Brawl respectively. We would always gather at one of our houses, the guy in particular is known as Insd here on Dtoid, and play for hours on end. There were joyous, raucous, and trying times, but somehow we managed to keep playing.

Many times we would be yelling in excitement as the turtle on Termina rose out of the water and caught one of us as we plummeted to our death. This would result in an immediate pause of the game and prancing around the house. Fighting on Hyrule (the one with that cave area) we would gloat about our abilities to ukemi with high amounts of damage, or our abilities to catch items in the air with an air dodge. When someone got off a nice combo, you�d think there were monkeys and apes howling in that apartment.

There were also times when controllers were thrown in frustration. Losing to someone without killing them once (perfect stocking I think it was called?) warranted mockery from the winner, and the loser being reminded of the event later on. Arguments between friends over who was being �cheap� and not playing �fair�, edge hogging is a good example of this. Friendships put on hold for a month in order for the two opposing parties to simmer down because of an argument of who got a perfect match and when.

Overall there we were just being loud, one time the police actually came to my friend�s house when we were all playing Smash Bros because we were being so loud. They actually came in ready to fight because people called in saying there was a domestic squabble. Now my friend lived in an apartment complex on the top floor, so it makes sense why this happened. When the police found out it was a group of kids being ridiculous, they just chuckled, told us to chill out, and not cause any more trouble. Maybe they were sympathetic because they had similar shenanigans when they were younger, or they thought we were a bunch of crazy nerds.

Not this funny, but you get the point.

In the end high school finished and I left for California to continue school, essentially splitting the group for a few months twice a year. The loudness didn't stop though, at least for me. I found another group my freshman year and when we played Brawl I was the loud one at first, but others joined in as well. Whenever I go back home for both summer and winter breaks, however, we get together and play fighting games and other multiplayer fare. This results in similar events occurring when we played Melee, but not to the same extent. When we do play Smash Bros (Brawl or Melee), we tend to warn the neighbors that shit is hitting the proverbial fan�otherwise we bake them an apology cake.
#Community    #OpinionEditorial
Login to vote this up!