3:35 PM on 05.02.2011 (server time)    0
I recently had the chance to play Jonathon Blow’s award-winning indie game Braid and I was blown away by it. Although Destructoid already posted an extensive review of Braid by Reverend Anthony, Chad Concelmo and the notorious Jim Sterling back in ‘08, after having recently played it, I decided to have a go at this “writing a blog” thing, in the form of a review.

Braid is an Xbox Live Arcade Indie puzzle-platformer that has you solving physical puzzles by using the game’s time-based gameplay mechanics that the player-character, Tim, possesses. Throughout the game you have the ability to rewind time but in each world an additional time manipulation mechanic is added, such as the introduction of green-glowing objects that aren’t affected by the manipulation of time or the ability to have a shadow of yourself do the actions of what you just did before you reversed time, or being in possession of a ring that slows down time around it (time moves faster the further away from it). The game puts you in a central hub (a house) which gives access to the six primary worlds, represented by rooms in the house. In each world there are 12 hard-to-reach jigsaw puzzle pieces that you must collect in order to access the final world. The pieces usually involve a hard puzzle that you must solve to acquire the piece, and when you finally do get that piece that’s been tempting you to use a walkthrough but you didn’t, it’s a triumphant moment that you cherish. After getting all twelve pieces, you can now fit these pieces together on a virtual board to create a nice picture. 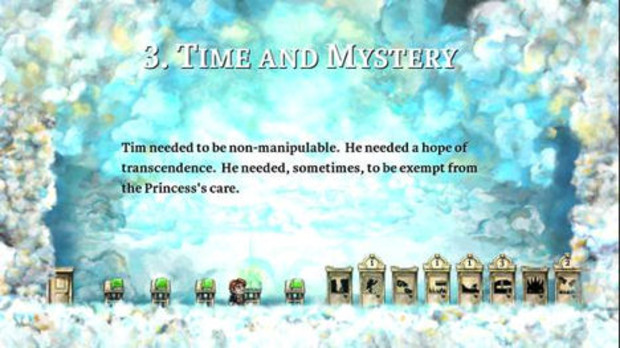 The presentation of the game is beautiful, and anyone who has played the game would agree that the game wouldn’t be the same if it wasn’t for the gorgeous watercolour artwork by David Hellman and the beautiful Celtic Cello strings heard in the euphonious soundtrack by Jami Sieber (even hearing the soundtrack in reverse as you rewind time is a pleasure to your ears).

Braid has received critical acclaim from every reviewer on earth, and for good reason. Even if you hate puzzle games, you owe it to yourself to own this game whether it’s for the music, the graphics, or that this game is recognised as one of the first art games. All in all, Jonathon Blow has given gamers a blessing, and in my opinion, he’s given us one of the best (if not the best) indie games out there.
#Community    #reviews
Login to vote this up!