12:49 PM on 05.01.2011 (server time)    0
Hello friends! Welcome to another batch of awesome freeware indie games! I had to skip last weekend's post, because of Easter and midterms. I've also been quite busy playing Portal 2 at my friend's house, so that's been taking up a lot of my time. I've still had some time to find and play some more indie games, though, so now I can share with you what I've been playing. 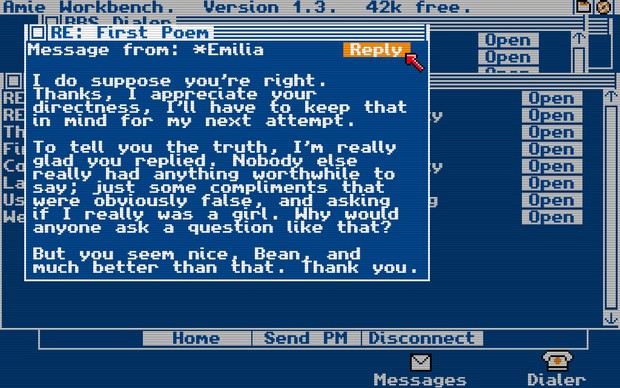 Digital: A Love Story is a very intriguing, immersive and emotional experience. It's a text-based game which places you back into the Bulletin Board Systems of the late '80s. The game is presented as a computer desktop, namely the Amie Workbench, which you navigate much like your own desktop. You can open messages, download programs to the desktop, dial numbers, and reply to messages on the BBSs. There is also a music player which comes along with your desktop, which will play different songs depending on your progress in the game. The music is quite nice. Digital does an excellent job of pulling you into the world of the game. Once you start reading the various messages and getting to know the characters, you won't want to stop playing until you've beaten the game. You learn about the characters solely through their messages and replies. You are unable to read your own sent messages, although you can usually infer what you said based on the replies that you get. It might have been nice to be able to read your sent messages, as I would've liked to know what I could have said that warranted a "FUCK YOU!" from one of the characters, but I guess you can just be creative and decide what you would have said yourself. The game also has a strange way of inducing paranoia in the player. I don't really want to spoil the game or the story for anyone though, so I won't say anything more about it. If you're unsure about whether or not to play this game, I say at least give it a try. I'm not really a fan of text-based games myself, but this one was a very interesting and rather emotional experience for me.

Hope you enjoyed these picks! And don't forget to donate to the developers if you can. See you guys next week!
#Community    #Indie
Login to vote this up!