6:46 PM on 04.30.2011 (server time)    0
Well folks, I was on Amazon today and I was looking at Catherine for my Xbox 360, figuring I should just go ahead and pre-order it. From what I've read of the game, it's basically a platforming puzzler meets Alpha Protocol/Bioware Game choice system, which is something I heartily approve of.

Anything which gives me complex choices is nothing but a good thing, is something I've always thought. Yet I found that decision coming to bite me in the ass a little bit right about now.

With the upcoming release of Catherine, I found myself facing an interesting dilemma of my own, name thus: 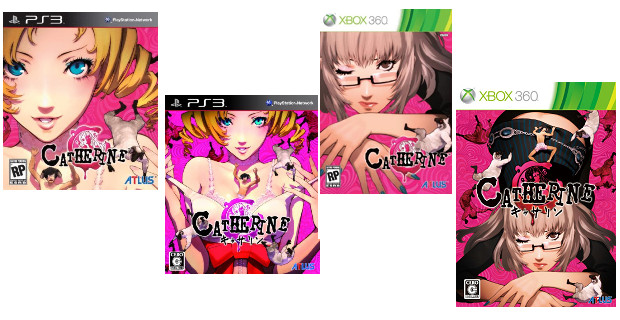 Atlus is providing two versions of box art for each release. The original cover art, and an alternative meant for easier consumption by the less open-minded folk. Normally boxart doesn't really matter one way or the other to me.

Now admittedly, there are a couple of games with excessive fanservice cover art which I keep tucked out of sight when family comes over. X-Blades and games of its ilk come to mind quite readily. Now, Catherine follows the same suit, at least as far as the original cover art is concerned. In fact, aside from the anime roots, it's actually a little more fanservicey than most: Instead of featuring outlandish characters, it's something a little more commonplace with a few freakish elements juxtaposed on the cover.

Now, I know which one I'm ordering. I decided to go for the original, because most of my family and friends know I'm an irredeemable lech anyway. It's not like this would be anything new. However I did give brief thought of ordering the alternate box art, so I'm wondering...

If you're interested in Catherine, are you picking up the edited box art, the original, or does it simply not matter to you?
#Community    #Rants
Login to vote this up!