The Story of Boone 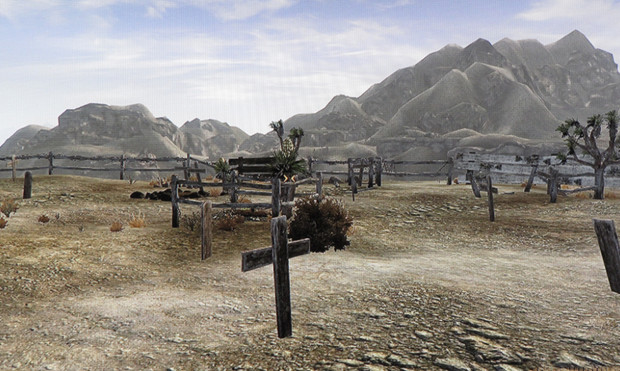 I have strong expectations a lot of you will laugh at this, that I over-reacted. That I’m in some ways a psychopath, that I really really didn’t have to do this.

I look at Boone again, I talk to him and say that same “Goodbye.”

I take out my trusty revolver and shoot him in the head.

His body falls to the floor and blood is everywhere.

What have I done?

This tormented creature, this shade of what was once a man has been granted peace. My friend has obtained his catharsis, his real peace and all it took was death. TheÂ absolverÂ of pain, the only true way to be happy with this world is to leave your troubles behind. Boone understood that, he tried and I helped and he tried harder. I remember our quests, our journeys, our laughs at the gaming bugs… except he wasn’t laughing. He was there, he was a character and he was shooting bad guys in the head. I remember being on a sliver of health and him jumping out of nowhere and battering a Nightkin to death with his bare hands.

I look at his corpse, this bruised man is free. There’s almost a smile on his face, a note of thank you.

I look at something I find in his corpse, it’s a note called For Carla.

If you're reading this, then you know. Sorry. Wanted to make it back home to you.

The pension won't be much but it should help you and the baby get by. Want you to remarry when you meet the right person. Don't want you to have to be on your own.

Not sure the right way to say how I feel about you. Think you know already, though. Always seemed like you knew what I meant, maybe better than I did. Wish I was there with you now.

There are things I couldn't tell you. Tried. Whatever you learn over time about my service in the NCR, hope you can forgive me.

Lastly, know you were against it, but if it's a girl, want her to be named after her mother. Know it's playing dirty to win the argument this way, but too bad. It's worth it.

For another time in my life, a video-game has pushed me to tears. I’m at the line, when your eyes just feel fuzzy, except Boone doesn’t need to be cried over. He’s at peace now, if I cried they would be tears of happiness. It’s time to… to move on. This broken soldier couldn’t be mended, but I fixed him somehow. His lost soul is now just many in this wasteland, except now he’s free. To where that may be, I do not know, but now he won’t live a life of pain.

A video-game has let me learn about a character, feel sorry for them and then go beyond just feeling sorry. It let me go beyond doing a simple side-quest or seeing a look of happiness on their faces, it let me take that step beyond. I haven’t heard a story like mine so either I’m completely insane in my action or most gamers feel like they don’t have as much as control as they actually do. Maybe they feel all this ‘cinematic gameplay’ and ‘moral choice’ has led into this sub-concious trend that we’re not players, we’re just actors and all we do is read from a film script.

From a simple little scripted story about a broken soldier, a dialogue choice mechanic and that age-old ‘shoot people’ mechanic I have made myself a story of heartbreak, redemption and peace. For once, a work of interactivity has allowed me to experience what it is like to watch someone with a tortured soul and allow me to place my hand on their shoulder. This is why New Vegas is the second greatest video-game of all time. It does something with interactivity, not just wallow in its typical showing off, in a sense it pulls a Shadow of the Colossus.

And that is art in all of its glory.
#Community    #Rants
Login to vote this up!