Aaamaazing: Grabbed by the Spetsnaz 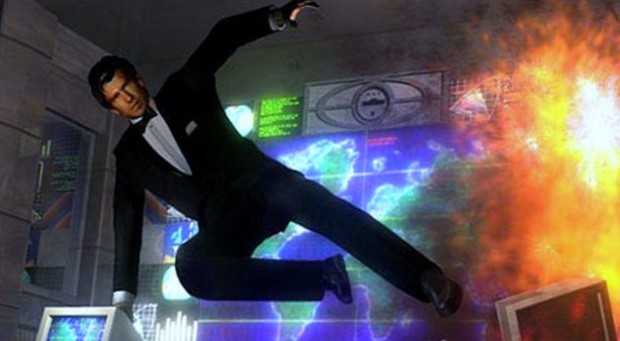 "Shit!" MacTavish exclaimed, "I left Deep Impact in my other loadout!"
"No problem," Bond said. He pointed his RCP-90 at the back of the counter and fired a single shot. There was a scream on the other side.
"Lucky you brought it with you," MacTavish smiled.
"No need," Bond said. "In my day, you just picked the right gun."
"Does seem a bit overpowered," MacTavish remarked.
"That's what makes it more fun," Bond replied, "It's not in the Power Weapons set for nothing, you know."
The two men climbed back over the wrecked counter. Bond picked up the general's suitcase from amidst the debris on the ground.
"Objective A completed," he said.
"Objective what?" MacTavish said, looking increasingly bewildered, "How many do you have?"
"On this mission, four," Bond said, "Although I've only two left to complete, since I snuck around the back and disabled the security for Objective B before coming in here."
"Man," MacTavish said, "I just made a straight line for the entrance. No idea it was possible to deviate."
"Like I said," Bond said, "You have plenty to learn."
The bartender, who had taken refuge in one of the cupboards, darted towards the door at the back. MacTavish pulled the pistol from his coat, but Bond pushed his arm away before he could fire.
"Objective C," Bond said, "Avoid civilian casualties."
"But he's gonna give us away!" MacTavish protested.
An explosion detonated from the room behind the bar and the bartender was sent flying back through the door as flames penetrated the walls.
"Luckily for us, I can kill two more before failing the objective," Bond said, "So a little fun with proximity mines never goes amiss. I should tell you about this poor fellow called Dr. Doak I met a while back."
"But you said you had two objectives left," MacTavish said, "What about the other one?"
Bond drew his PP7 and fired a shot at the shelf in front of the mirror, shattering a bottle of whiskey.
"That one was for me," he said, "I can't stand American whiskey."
MacTavish shook his head and wrapped himself back in his raincoat.
"Bond," he said, "I think I owe you an apology. You may not look so good these days, but damn, those are some rare skills you've got."
"That's okay, MacTavish," Bond said. He checked his watch again. "I'm glad I set this to the right time. We finished this mission in under two minutes and fifteen seconds. I'm invincible now."
MacTavish looked at him dumbfounded.
"Don't worry," Bond said with a grin as they left the bar, "You just wait until I tell you about DK Mode."

Flixist Film School: How To Write An Ending
#Community    #OpinionEditorial
Login to vote this up!