8:46 AM on 04.24.2011 (server time)    0
I�ll be the first to admit, I�m a videogame news junkie; even when it comes to either titles or systems I don�t own. Part of the downside of this is that I�m often not surprised when I actually play a game because there�s a nagging feeling I know what I�m getting into. Usually it starts off with a big reveal story, outlining the developer, some basic story info and usually some gameplay hook. Then the publishers will tease out some more information about the game, either through some previews, trailers or interviews. By the time a game comes out, we�ve already consumed a heck of a lot of information about what the game is (at least in our minds) and what we can expect. It�s gotten to the point that I�ve actually started going on self-imposed media blackouts when it comes to games that I know I�m definitely going to play, but I don�t want anything spoilt for me. So, like Mass Effect 3 and Deus Ex Human Revolution are must-plays for me, but I�m no longer going to gobble up all the information I can before I play them.

So for a game to really grab me and show me something that captivates me is sadly rare nowadays. In the case of Bioshock, I read lots of articles about it as it really captured my imagination; the idea of an art-deco city at the bottom of the ocean struck me as really unique setting and the idea of combining plasmids with regular weapons seemed like an interesting way to play an FPS. It even got to the point where I played System Shock 2 just before the release of Bioshock, in order to understand the comparisons between the two and to figure out if Bioshock was really it�s �spiritual successor�. 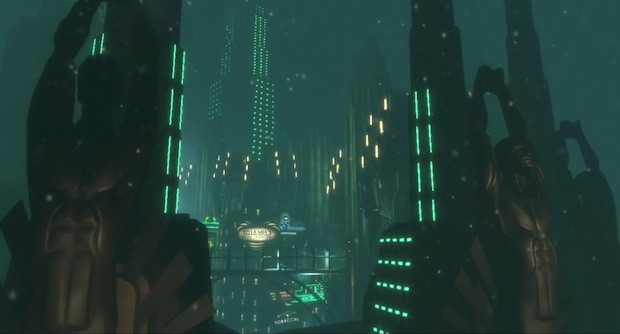 Again, even though I thought I knew what I was in for, I was still taken aback at the scene, to the point where I actually got goosebumps. Passing overhead and seeing the sheer scale of what was in front of me was amazing, to the extent that I almost didn�t hear anymore of Ryan�s proud boasts. I caught a glimpse of a Big Daddy prowling a glass corridor, another un-identified figure welding a metal strut... there was even a big friggin� whale swimming between these undersea skyscrapers. Imagine what it would be like to live in a place were a whale could swim by your bedroom window. Eventually your trip finishes and you realise the horror you�ve stumbled into, as a crazed splicer guts what your would be rescuer.

Of course, the game was amazing, all the more so as I was playing it before most people got their hands on it, so I was experiencing it raw and unfiltered. I played up to Arcadia, so I managed to avoid the big reveal and the final chapters, but I had a sense of how good Bioshock was. That opening will always be something that sticks in my mind about how you open a game: expansive, captivating and enthralling. The beginning of Bioshock is all of these and more.
#Community    #OpinionEditorial
Login to vote this up!