This is the one month anniversary of my freeware indie game series. I'm excited that my blog seems to be getting such a positive feedback! Beginning this week I'm going to start listing the developers of the games as well, since they deserve all the credit for making these wonderful games and letting us play them for free. I probably should have done this to begin with, so I'm going to edit all of my previous posts to include them as well.

And now for this week's picks: 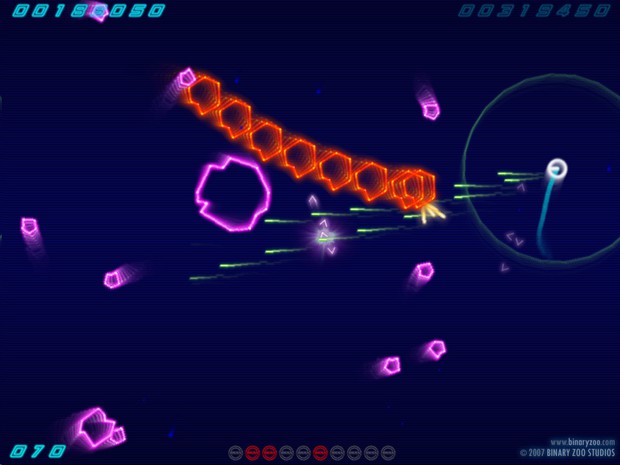 Echoes is a very polished shooter which looks like a mix between Asteroids and Geometry Wars. Each stage introduces a new type of enemy which will require you to use different strategies to deal with them effectively. The most vexing enemies, for me at least, are the orange asteroids pictured above which follow you mercilessly until you shoot them all down. Anytime you collide with an enemy you will lose some energy, which is indicated by the size of the ring surrounding you. There are three types of power-ups you can find: one which increases your firepower, one which replenishes your energy and one which acts as a bomb to help destroy enemies. The game also features various tasks, known as Zoots (which are sort of like achievements I guess), that you can unlock while playing to earn higher scores. There is also a bonus game called Crack which you can unlock by completing a certain number of Zoots. The game's graphics are very beautiful, with bright neon colors and blurry effects. It's a very neat, well-made take on the classic Asteroids shooter model.

And that concludes week five of my freeware indie blog. I hope you enjoy these games and I'll see you all next week!
#Community    #Indie
Login to vote this up!