4:09 PM on 04.14.2011 (server time)    0
For most people Nintendo's defining moments came in 1985 when Super Mario Bros. arrived and changed the landscape for video games forever. During that time, my cousins, friends and almost everyone I knew would have a Nintendo Entertainment System or later a Super Nintendo to call their own. Everyone except this guy. Even back then I was a rebel, a staunch Sega supporter. Really though back then, it wasn't because I hated Nintendo because I did have fun with it, I just was drawn to other games like Shinobi, Golden Axe, Altered Beast, Wonderboy, Alex Kidd & Miracle World and not to forget multiconsole stuff like Double Dragon which at one point had it been only on a Nintendo console might have swayed me to Nintendo's side. However it wasn't meant to be and ironically I'd miss out on the beginnings of a great partnership that would last through several console iterations. That partnership you ask? Nintendo & Star Wars. A winning combination that would lead to some of the best Star Wars games ever put to a video game console. However I'm here to talk about the one that would change my perception not only action/adventure games but Star Wars games in general. It's one of my favourite games of all time and it's name is Shadows Of The Empire. 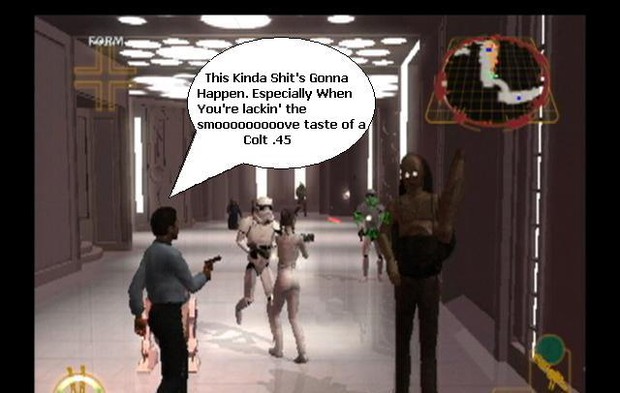