So last week I told you that I might not be able to discuss higher resolution indie games as I wasn't able to play them. This was apparently a lie, as a few days later my friend allowed me to try out Octodad on his computer (details below). So that was nice of him. Hopefully he'll be nice enough to let me try out some other games in the future. I'm still really excited to try Devil's Tuning Fork.

For now, let's continue with this week's indie picks: 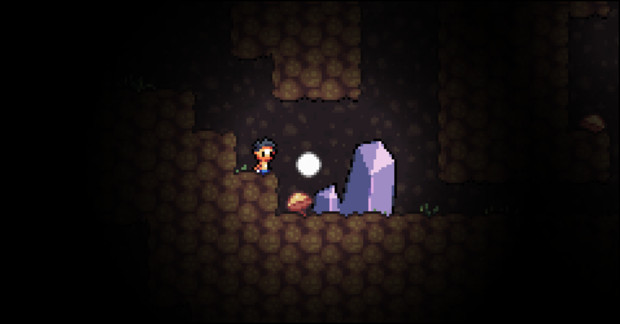 In Beacon, you play as a boy who awakens to find himself in a pitch black cavern. Suddenly, a beacon of light appears and begins to guide you through the cave. It's a relatively simple platformer in which you must jump and climb to traverse the various rooms of the cavern and keep up with the beacon of light. If you fall behind, you will be left in the darkness to die. The game is all about atmosphere, as you come across potentially hostile shadowy creatures and dangerous obstacles in a mostly dark and rather claustrophobic cavern. The game features very beautiful retro graphics and very eerie sound effects. I'm not a huge fan of the poetic dialogue and all of the various game over messages however, as they began to sound a bit too emo for my tastes. If you don't mind the poetry though, the rest of the game is really quite good. I particularly enjoyed the ending as well, it was quite a surprise!

And this ends week number four of my freeware indie blog! Hope you guys are enjoying it so far!
#Community    #Indie
Login to vote this up!