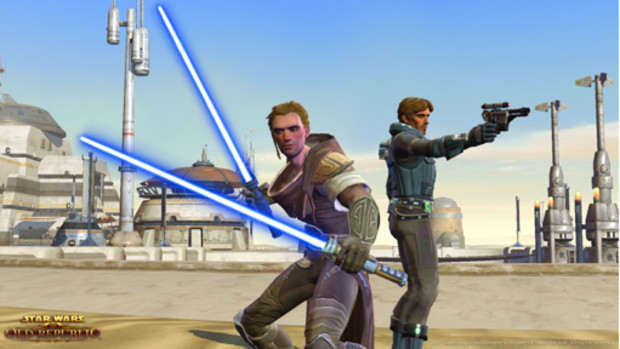 The line to demo Star Wars: The Old Republic at PAX East reached six hours plus. I heard nightmare stories about eager gamers waiting in line all day, completely passing up any opportunity to play other demos. Lucky for me, I only waited for thirty minutes before I got the chance to test out the most anticipated new MMO of the year. Bioware gave those fortunate enough to reach the end of the line a good thirty minutes to test the game. There were two demos featured: a run through a newbie zone or a group play event. Although I did see others play the group experience, I tookthe chance to check out the newbie zone.

Most opted to play the Empire, so I decided to play the role of a young Jedi of the Republic. Also to note, I wasn’t allowed to create my own character but instead had to play a premade newbie. Despite the lack of creation I still enjoyed the upward, yellow scrolling text explaining my situation. So when I showed up for my training, of course things were going wrong, and I was chosen to fix the problems.

One of my first tasks was to go save captured Padawan trainees. Even though I was still a trainee myself, I still liked feeling like I was higher ranking and, well, better trained than the other Jedis. It made me feel, as an MMO should, that I was important to this world. During these quests I was grouped with another PAX attendee and was happy to know that whenever he did something for a quest, I also got credit. Although I should mention (and yes I know, the game is still in construction) when I opened empty cages I somehow managed to get credit for saving Padawans. And yet, other times, I wasn’t even allowed to open cages with Padawans in them; still a little glitchy.

I also noticed that several of the Bioware staff were eagerly watching gamers play, absorbing constant feedback. At one point I had to have one of them point out my communicator interface in order to pick up a quest, commenting that, “Lots of people seem to be missing that. Don’t worry.” It’s good to know the people making the game are not shy about their errors and learning how players experience the game.

But the Bioware dialogue tree is everywhere and not glitchy. Even though I do love Bioware dialogue trees (complete with the nice answer, the jackass answer, and the joker answer), I’m torn whether or not such conversations will get annoying when all I want to do is accept a quest and go. From what I understand, even during group missions there will be dialogue trees. The player will get light and dark side points depending on their answer, and the group as a whole will get light and dark side options. So, the Jedi player can be nice while still playing with a bunch of smuggler jerks.

As for the combat, I did love ‘force leap’. Whoosh-whoosh went the light saber and zoom I went flying over to a monster. It was pretty awesome. However, when I was attacking it felt weird not to have an auto attack. It hurt the experience of combat; one moment, my Jedi would swing wildly at the creature and then, moments later, I was standing stupidly still getting attacked while waiting for cooldowns.

I would like to comment on the audio, but even with headphones, it was difficult to hear anything over the roar of PAX. Overall though, The Old Republic was fun to test out. It’s hard to judge an MMO with only thirty minutes of playing with no sound. It reminds me of WoW but with Jedi Knights, which isn’t a grievance by any means. Considering there is no release date, I have high hopes that Bioware is trying to make Star Wars: The Old Republic an excellent MMO.
#Community
Login to vote this up!