Thesistoid: The history and Importance of virtual worlds, pt.1


I. In the beginning there was MUD


Though the virtual worlds themselves can have established stories or in-game characters to interact
with (called NPCs or non-player characters), not all of the characters in these worlds are controlled by the game itself. The human player controls the aspects of his/her in-game character, taking charge of interacting with the created experiences of the game environment and, in a virtual world, with other players in a dynamic, collaborative narrative interacting with and within the designs of the virtual environment. A game arguably only becomes a “world” when its in-game characteristics do not remain static, for example, when the narrative experience changes as more players interact within the game. However, virtual worlds exist, necessarily, with or without interaction from players and are defined as “persistent” worlds simply whenever the content of the environment is being changed persistently over periods of time whether that means with updates (patches) or in-game events that could occur at any time.

Since their inception in the late 1970s, virtual worlds have developed in extraordinary ways, beginning with the first MUDs (Multi-User Dungeons) all the way to the current generation’s titular games, like the immensely popular World of Warcraft, the social simulator Second Life and the social-networking game FarmVille on Facebook. With an incredible amount of creative utility and social interplay, virtual worlds have redefined what can games can achieve and what virtual spaces can represent, offering far more to users than just the pursuit of entertainment. However, the foundational focus of play in games, whether with a player’s environment, creatures or interaction with other players, is representative of a core aspect of human culture in general, one that has been importantly brought over into the virtual world and is a key argument for the importance of these worlds and games in general (I will discuss this topic in more depth later on). That being said, virtual worlds, like those seen in Second Life (2003, Linden Labs) or the popular MMO (Massive Multiplayer Online Game) Club Penguin (2005, Disney), a game targeted primarily at children ages 6-14, play host to complex social interactions between players, engaging players in actual businesses, promoting education and focus on social interaction as opposed to fighting monsters or direct competition between other players.

These virtual worlds, from World of Warcraft (known colloquially as “WoW”) to Second Life, are drawing in huge revenues from subscriptions, exclusive content and expansions (Club Penguin has 700,000 subscribers and generates $40 million per year) and have become lucrative businesses for the developers and publishers as well as the users themselves who create businesses selling in-game items or characters. Though today the influence of lucrative consumerism and e-business has certainly changed the landscape of virtual worlds, the core aspects that attracted the first players to these places in the 1970s-1990s remain largely unaltered. The principles of interactivity and play remain at the forefront of these virtual worlds, encouraging in many players the sense that they are engaging in a real world, even if it is one that appears on a virtual plane.

A seemingly far-cry from today’s big-budget MMOs that often emphasize gorgeous visuals, artistic vistas and complex in-game physics engine, the first virtual worlds were text-based games mostly written and coded by college students and young programmers as hobbies. These games, called MUDs (Multi-User Dungeons), were usually fantasy-themed adventure games, where the objectives often revolved around defeating various monsters or simply staying alive. Their structure and stats/rules based architecture of the games borrowed liberally from their tabletop role-playing predecessors like Dungeon and Dragons while the narratives resembled that of the 1970s Choose Your Own Adventure children’s television series. Players could sometimes choose various roles to be played within the game and various paths could be taken that would affect the outcome of the game. Coupled with inventive story-telling that could range from macabre to humorous within a sequence of events, MUDs were lovingly crafted pieces of interactive fiction written and played within tight-knight small communities of people before the advent of mass internet access could spread their culture and games across the world. 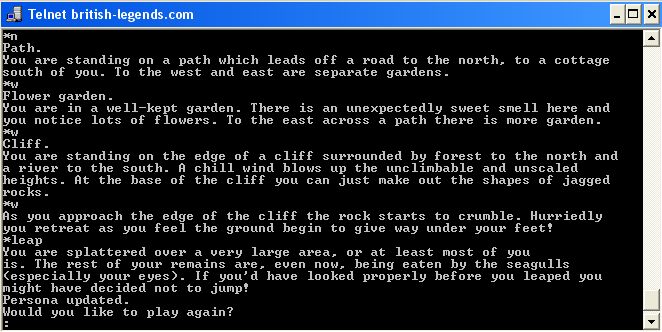 These games came out thirty years before our generation’s World of Warcraft, Second Life and FarmVille were being played by millions of people across the world and laid down the fundamental groundwork for RPGs (Role-Playing Games) and MMORPGs (Massively Multiplayer Online Games) to come. Produced through the grassroots efforts of individuals and small communities, the first MUDs implemented important frameworks for narrative fiction and emphasized the structure of rules-based gaming engines left powerful precedents for future generations of developers to follow. MUDs most important contribution, however, was the innate emphasis on social interactivity in-game that would position virtual worlds paradigmatically as places that were not static and required interaction, whether on the part of the developers updating the narrative and environment, or the social interaction between players. Foundationally, these MUDs began life without commercial incentivization and were free to play for anyone who could access them (which was quite difficult without mass access to the internet) for almost an entire decade from the time of their inception in the mid-1970’s to the mid 1980’s; these games were made out of love for the medium and a passion for sharing that love with others. (Citation Castronova p.10)

Arguably the most influential of these games were MUD, created by a University of Essex Computer Science undergraduate named Roy Trubshaw, and Habitat released seven years later, written originally by Randy Farmer and Chip Morningstar for LucasFilm. MUD began as a pet project of Trubshaw, an avid gamer and skilled programmer, while he had free time, utilizing the University’s computer labs and support from his friends and teachers. Trubshaw had wanted to create a game that could capture the role-playing elements of his favorite MUDs, like the text-based Zork I (1980) and HAUNT (1979) computer games (also designed by college students), and introduce multiplayer elements to his game that would make it more interactive, social and fun. Trubshaw had finished coding the first version of his video game by the fall of 1978 and had designed it entirely using a basic assembly language called Macro-10 mainly to simply establish whether the game’s virtual world could be maintained and shared with other players and accessible through multiple terminals. Following the release of a working “Version I”, Trubshaw began work on a second version that ultimately failed to accommodate updates and added features that were being added to the game as Trubshaw tweaked with the structure and listened to his friends’ opinions about what should be included in the game. With the revelation that the Macro-10 language couldn’t support dynamic changes in design, Roy devised the third version of his game, using two separate coding languages for the game engine (e.g. physical rules) and the game world (enemies, quests, interface etc.). In coding the engine Trubshaw used a predecessor language to the “C” computer language (most computer systems use a variant of this language today) and the game world was coded with his own designed language, dubbed MUDDL (Multi-User Dungeon Definition Language). All of this was occurring in an early era of computer age, where for many, it was a revelation that computer language had to be dynamically designed to symbolically instruct the computer environments how to function and how to create dynamic virtual worlds that people could interact with.

With the phenomenon of computing still confined to relatively niche communities of academics, scientists, small groups of coders and military personnel, programming languages were much less complicated and creative than the languages society uses today in programming and game development. Assembly languages like Macro-10, like most creative languages, both computer and human, revolved around the principle that inputs of certain computer-recognized symbols would signify specific meanings (actions), and that by transferring these symbols through outputs, the computer could derive meaning and thus function in intended ways. This was important because it meant that the system, the engine of the game, pivoted on a rules-based physical architecture whereby the game could be “instructed” to function according to certain of rules (e.g. if player chooses a, consequence is b). The circulation of symbols within machines, like within cultures, conferred certain meanings, but, however, computers were not able then to “understand” meanings and were simply interpreting symbols. It took the work of designers and the interaction of players to really grant understanding upon these virtual worlds. Therefore, fundamentally, virtual worlds may be “persistent” without players, but can only encapsulate culture when actual humans are interacting with a games designed environments. Because these communities of gamers and coders were still tight-knight and relatively isolated small bands of people, the culture of these virtual worlds would need to be spread via mass communicative methods before the culture could spread and form the “biomass” of online virtual cultures that we see today in the world’s most popular MMOs (Stephenson quote).

Eventually, virtual worlds found a conduit to travel to others via the coincidental proximity of the British Telecom research facility to the University of Essex, leading to the University being selected to pilot test a packet-switching service called EPSS that could connect to the US-based ARPA Net (Advanced Research Project Agency). Packet switching services, like EPSS and the American ARPA, were early incarnations of what we now recognize as the Internet. These systems were comprised of a mass of networked terminals connected through wires, capable of pushing raw information, regardless of content or type, through to other terminals connected within the network though, of course, at much slower speeds and with far less total bandwidth (how much data can be carried through wires) than we enjoy today. The EPSS link to ARPA Net allowed for the tiny band of programmers and gamers at the University of Essex to connect with researchers and fellow programmers across the Atlantic, eventually attracting groups of American designers, engineers, academics and gamers oversees to check out MUD. By 1983 all universities in the U.K. were connected to a mass packet switching system called JANet (Joint Academic Network), while the formerly experimental EPSS was expanded and became the PSS (Packet Switch Stream). These two innovations allowed for MUD to effectively become the first “viral” videogame, spreading by word of mouth on packet switching and BBS (Bulletin Board Systems) networks. (It is interesting to note that the later incarnations of the internet would absorb these BBS systems into recognize as forums, where people can come to access files located in a centralized virtual space.)
#Community    #Indie
Login to vote this up!